Hypnobabies Gave me the Birth I Dreamed of 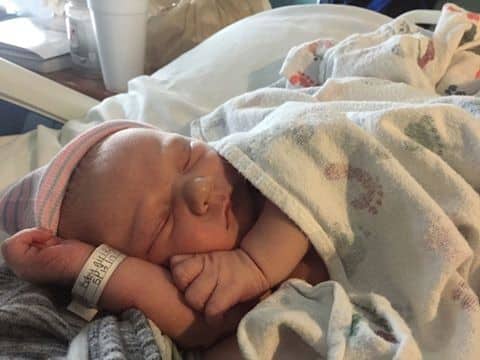 Hypnobabies Gave me the Birth I Dreamed of

“I laid down, sleeping on and off, listening to my Birthing Day Affirmations and Easy First Stage. I wondered if I was listening to them to early but told myself it would be okay. Around 11 I realized that my waves were slowing down and figured tonight wasn’t the night but it would probably be this weekend. I decided to time my waves again to see how much they had slowed down. Well… it turns out they were 3 minutes apart!” 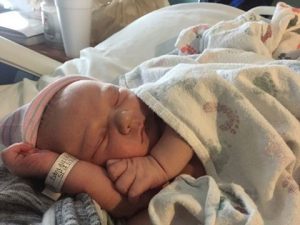 Penelope May, our Poppy as we call her, was born May 13, 2017 at 2:00 am on the dot. She is my 2nd child but 1st hypno-baby. My first, Grace, is 22 months old so they are only 19 months apart. I had a difficult birth with Grace where I experienced a cascade of interventions and had some long term bladder issues as a result. I had taken a Bradley class and while I absolutely loved the class, I felt lost when it came to my actual birthing time.

When I found out I was pregnant the second time, I was determined to do things differently. I found Hypnobabies by searching for birthing methods that would teach you actual techniques for during your birthing time. To be honest, I wasn’t really sure it was for me at first. I am a bit of a Type A personality, somewhat high strung and really believed I couldn’t be hypnotized. Luckily, I joined this support group and asked for some feedback and found that others like me had great success with the program so I decided to just buy in.

I told myself I would commit to the program and believe it can work, and spoiler, it did. I did the home study and followed the instructions almost exactly. I listened to my Joyful Pregnancy Affirmations twice a day on both commutes. I typically did my main track by setting my alarm 45 minutes early every morning and then would do my Finger Drop Technique practice at night before I went to bed.

About five weeks before my guess date I decided I wanted some extra support from someone less emotionally invested than my husband (who is an incredible partner) and made the amazing decision to hire Keli Engleson http://www.inharmonybirth.com/ as my hypno-doula. It was total luck that she was available as she was supposed to be traveling right over my guess date and it was cancelled last minute so she was open. Otherwise she was booked for months out! Fast forward to my birthing time…

I had been having practice waves throughout my pregnancy which was a new experience for me. They picked up the last two weeks but just felt like my upper stomach was tightening. I was becoming increasingly irritable. For some reason (hormones haha) it was really annoying me to get dressed in the morning and I did not want to go to the office. My guess date was May 12. Thursday evening, May 11, I decided I was not going to the office the next day no matter what. I really think that was all my body needed to relax and get things going. My waves picked up and were completely manageable but stronger.

The next day (my guess date) I worked from home in the morning. I felt fine in between waves so it was no big deal. In the afternoon I was suddenly really tired, so I took a nap while listening to Fear Clearing, Joyful Pregnancy Affirmations and Deepening. I picked up my first daughter at 5 pm and we all took a walk when we got home. The waves picked up on the walk and I often had to stop walking to focus through one. I still didn’t think it was my birthing time and thought that things could go either way at this point.

When we got home, I sat on the birthing ball and we all played in the living room. I decided to time my waves a bit and they were about 6 minutes apart and a minute long. A bit later, my husband put my daughter to bed. While he was doing so, I decided to update my midwife. This was around 8 pm. I knew she worked at the hospital that day so I wanted to let her know things were picking up while it was still normal hours so she could prepare just in case. She agreed that it sounded like things could go either way so advised me to take a bath or a nap and try to get the waves to slow down. She said if they don’t, we’ll know it is time and to just come into the hospital whenever I felt ready. As a second time mom, my midwives didn’t want me waiting too long since I had about a 35 minute drive to the hospital.

I laid down, sleeping on and off, listening to my Birthing Day Affirmations and Easy First Stage. I wondered if I was listening to them to early but told myself it would be okay. Around 11 I realized that my waves were slowing down and figured tonight wasn’t the night but it would probably be this weekend. I decided to time my waves again to see how much they had slowed down. Well… it turns out they were 3 minutes apart! Time slowing down was entirely in my head thanks to my hypnosis. This was around 11:30 pm so we called my Mom who hopped right in the car and got to my house at 12. She was with my 30 year old brother who came to help with my toddler. I didn’t want to scare my brother too much so I really pulled myself together when I left the house.
We left immediately for the hospital and got there at 12:30. I listened to my hypnosis tracks the whole way. The car ride was tough for me as I knew it would be from my first birth. However, while the waves themselves were tough, I was able to completely relax in between which was incredible to me. Keli met us right at the car and we walked up to L&D. I think I cracked everyone up because I made them take the stairs – something about getting in an elevator didn’t sound good to me! Luckily my midwife must have trusted I was pretty far along because I was taken right to a room and didn’t have to go through triage.

They checked me but I asked not to be told how many centimeters I was unless they were sending me home (I really had no idea how far along I was.) After I was checked my midwife said something like “if you get the urge to push just call us right away so we don’t miss anything” so that made me think, maybe I was fairly far along. They wanted to monitor the baby for 15 minutes but I just could not stand still so they ended up pretty much giving up, oops!

I wanted to take my birthing ball into the shower but my midwife felt uncomfortable because she thought I may slip. I really didn’t feel like arguing with anyone so I just said okay and sat down on the floor of the shower and leaned on the back of a chair with the hot water flowing on my back. I don’t really remember the next hour as I just zoned out and listened to my tracks. I know I yelled at everyone at one point to leave the bathroom door closed because it was too cold when they opened it. Otherwise, I really just wanted to be left alone.

About an hour later (in real time – I had no idea how long it had been), my midwife went “Lauren, are you pushing???” In my head, I heard myself go to say “No, I just have to go to the bathroom!” and actually cracked up out loud because I realized that is what everyone says when they are pushing so I admitted, yes, I must be. They asked me to move to the bed which I did except for one wave on the way where I basically collapsed into a squat position. I then got onto the bed on all fours facing the back. I have no idea if anyone cared if I did that because there was no way I could move in any other position –that is what felt right to me. I pushed through maybe four waves. I did push but for the most part it was like my body was doing it for me – like I had no choice. I got on the bed at 1:48 am and Poppy was born at 2:00 am and that was it! I actually yelled out “I did it!” when she was born! 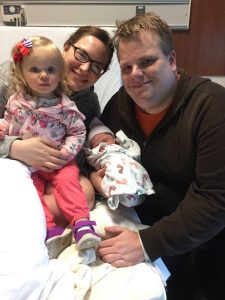 My midwife passed her through my legs to me and she was beautiful but took a minute to start breathing. We had planned on delaying cord clamping but my midwife said I need to take her I’m going to cut the cord (this was totally fine with me in this situation of course). As she said it, my beautiful girl let out the most beautiful cry and was just fine so our original plan stayed in place. It turns out that she was born en caul! That means my water didn’t break and she came out in her amniotic sac. It burst as she hit the bed so that is why I didn’t see it. I do have some amazing pictures of it including one short video where you can hear my midwife say “this is soooo cool” as her head is out but in the sac.

We cuddled and nursed for about 2 hours. We found out that she was 8 lbs, 3 oz and 20 inches. As an aside, during both of my births someone has said to me something along the lines of “you’ve got a big baby in there!” and both of my girls were completely average size (Grace was 7 lbs 9 oz) so don’t listen to any of that! I texted my Mom and brother a picture of the baby to let them know we were okay and they were SHOCKED. They thought it would be a text saying we settled in the room and couldn’t believe she was already here based on how calm I was when I left the house. I later found out I was already 8cm when I arrived at the hospital.

We moved to the recovery room around 4 am and my toddler came to visit that night. We were thrilled to be able to go home the next day – Mother’s Day! I felt fantastic and had no issues with recovery – a whole new world from my first birth. Hypnobabies gave me the birth I always dreamed of and I can’t recommend it enough to other mothers-to-be. While my birth ended up being quite fast, my hypno-doula Keli made me believe in myself and my abilities and that was worth the world.