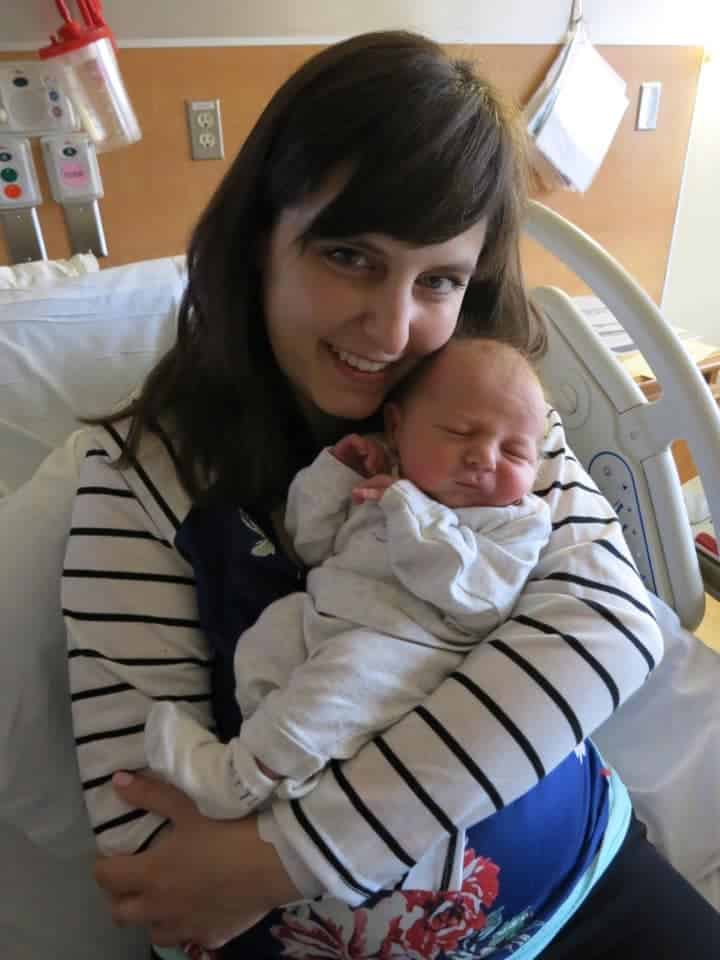 “It was amazing to already be in transformation (Hypnobabies word for transition) when I was just at 4 centimeters and still feeling very at peace in my birthing time. That was one of the coolest experiences. Feeling so much pressure as my baby moved but being fully comfortable and aware in the moment.”

With my firstborn, I had participated in the Hypnobabies program and was comfortable with using the practice. However, my baby was breech and would not turn, so I had a cesarean with him. I was excited and nervous to dust off my Hypnobabies course materials again this time around, a year and a half later, and get my hopes up again for a natural birth. I shouldn’t have been nervous, because the program really does work to give the best chance of a natural birth!

In this pregnancy, a few days before my 40-week due date, I had prodromal waves. They would start at 20 minutes apart and then go to 15 and then 10… and then stop. It was so discouraging and exhausting. On my guess date (Hypnobabies word for due date), at about mid-afternoon, I started feeling more pressure waves (Hypnobabies word for contraction). I didn’t think anything of them because of the pattern for the last few days. I took my toddler outside to play, I texted my husband a grocery list to pick up after work, and I started making dinner. 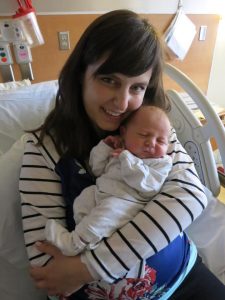 While cooking, I kept having to stop to focus on my waves. I would say “Peace” (Hypnobabies cue for instant physical comfort) and picture my hypno-anesthesia, which made them comfortable. I still was sure they would go away, so I just kept cooking. I did text my husband to skip the grocery list just in case. He came home, I finished dinner, and felt like the waves were closer together than they ever had been. I went to our bedroom and laid down to time them. I timed four waves that were all 5 minutes apart. Ok… maybe this was the real deal after all!

I calmly told my husband that we should maybe get to the hospital since I think this is our birthing time (Hypnobabies word for labor). (Ha! I was still so uncertain about it even at 5 minutes apart as I was still comfortable.) My husband called our hospital, and they were completely full. I didn’t panic, but instead focused on my waves and imagined my Bubble of Peace (Hypnobabies tool to keep negativity away) to not freak out. Ten minutes later, they called us back to reroute us to a nearby hospital with an opening. Thankfully, my mother-in-law was already staying with us and ready to watch our toddler, so we said our goodbyes and were off to the hospital.

In the car, I turned on my Birthing Day Affirmations track. I was amazed at how well listening to the track helped me be completely comfortable! Being in the car was one of my biggest fears because I have heard how uncomfortable it is. I closed my eyes and would grab my husband’s hand while repeating the affirmations during each pressure wave, and they would easily pass. Before I knew it, we arrived at the hospital around 6:30 p.m. I filled out paperwork in between waves (still very comfortably) and got into our room. At that point, the nurse was trying to get a hold of my midwife. She checked my blood pressure, and although I had low pressure throughout my entire pregnancy, it was very high while in my birthing time.

She had me hooked up to be continuously monitored and advised me to not leave the bed. This was awful news. I had all of these wonderful positions and movements in mind for my birthing time. Although this was not in my ideal plan, I just listened to my “Easy First Stage” track (Hypnobabies main birthing day track) turned my light switch off (Hypnobabies tool for being in hypnosis) or to center, and was able to fairly easily get through each pressure wave, even with being in the bed.

After an hour of being there, my pressure waves were getting more intense and closer together. It felt like they were coming every two minutes, but I wasn’t timing them. My midwife still hadn’t arrived. Apparently, there was confusion and they called a doctor instead of my midwife, so they had to try and get a hold of her still. I’m unsure what really happened with all that. The nurse checked my dilation and I was surprisingly only a 4. She was out of the room for a long time after that. During her absence. My husband continued to man my iPhone to play my tracks. I wound up just repeating “Easy First Stage” a lot thinking that was where I was in my birthing time.

Within the next half-hour, my pressure waves were getting very close together. Honestly, I had tuned out the track playing at this point and started just going internally with envisioning my hypno-anesthesia and turning my light switch off. Things were progressing so fast! Pretty soon, my body took over. I felt the need to get on my knees in a better pushing position and started low moans. My midwife still wasn’t there, and the nurse hadn’t returned either. I remember clearly thinking my husband will have to catch this baby but couldn’t vocalize it in the moment. I just swayed on my knees in a lunge position on the bed and focused on the movement of my baby moving down.

It was amazing to already be in transformation (Hypnobabies word for transition) when I was just at 4 centimeters and still feeling very at peace in my birthing time. That was one of the coolest experiences. Feeling so much pressure as my baby moved but being fully comfortable and aware in the moment. The nurse came in (finally) right as I felt a trickle and saw some blood on the bed underneath me. “Is that normal?! Also, I feel like I’m going to push this baby out soon.” First-time mom over here did not know what to expect. “I think your water broke,” she anxiously stated.

This was the first time she showed signs of being a little nervous. She then tried to quickly get a hold of the on-call doctor they had on-staff. He was already occupied. Now, she looked worried but tried to hide it. She definitely did not expect me to be that far along!

A few minutes later, my midwife rushed into the room (hallelujah!). That is where a whirlwind of things happened. She wanted to check me, so I had to get on my back again (not happy about that). Apparently, my water didn’t fully break so she used a hook to break it. Then the baby really moved further down. His heart rate was also really low at that time, so my midwife advised I push him out immediately. It was such a fast-paced situation.

They pulled the stirrups out, got my feet in them, and told me to push. I didn’t have the time to demand a different position, I could feel the baby coming. Since my trusted midwife told me I needed to get my baby out “now”, by golly, I got him out right away! I envisioned a wave of hypno-anesthesia going before my baby and gave a huge push. There was so much pressure, but I was surprised it wasn’t “painful”. I was so engrossed in hypnosis (and in a position where I could not see well) that I had no idea the baby was crowning after that first push. My midwife was reaching for towels and was about to guide the baby out when I gave a second huge push. It felt like the baby flew out of me. Honestly, I had to ask my husband if that is what happened. To which he playfully replied, “That only happens in movies, honey.” So, the baby didn’t actually fly out of me like it felt. I just pushed his head fully out really fast with that second push and the rest of his body quickly and easily followed. I seriously gave two quick, huge pushes and he was out! It was actually easy.

Our Vincent was born on his guess date at 8:55 p.m. Just a little over two hours from when we arrived at the hospital. I was comfortable and at peace through the entire experience, even with not being in my ideal positions for birthing. It was way more uncomfortable recovering afterward than the birth itself. I can honestly say I felt a lot of pressure in my birthing time, but it was pain-free. Hypnobabies works!!