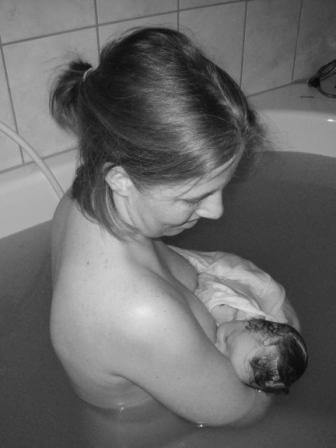 First, I’d like to say that I used the hypnobabies home study course and was probably a C student. 🙂 I was very good during the first 5 weeks, but during maintenance, I rarely listened to affirmations and only did about 2-3 finger drops per day. This was my second child, first hypnobaby/first natural birth.

I was 5 days past my due date, but was still feeling pretty zen about waiting for baby. Weh ad just recieved a new computer in the mail since our old one had died, and the boxes arrived at around 11am. My two year old son went down for his nap at noon, an das soon as he was asleep, I began opening boxes, taking apart the old computer, and setting up the new one. I kept needing to stop because of  cramps in my back, which I at first assumed were just related to being overly-pregnant and crawling around under the desk, lifting up boxes, etc.

Around 1230, it dawned on me that the back pains were coming and going… sort of like waves! I timed a few, and they were 4 minutes apart. They were extremely mild and I was able to kep working through them. I went ahead and called my husband and told him not to come home, but to just get himself organized just in case. I then put on my birthing day affirmations and kept working. At 1245 I called him back, and told him to come on home because I wasn’t 100% sure it was the real thing, but better safe than sorry. I then called my midwife, who said she’d come check me at home in 45 minutes. My husband got home around 1:15, and the midwife arrived around 1:45. She checked me out, and I was dilated to 2cm and the baby was still posterior but said my cervix was *like butter*. This was really cool to hear, as it’s in some of the hypnobabies scripts. The PWs were still very bearable, and I natrurally assumed positions of leaning over- feet spread apart and bent at the waist with my hands on the bed or couch, or squatting whenever I felt a wave. I used the Peace cue with great success.

My midwife went to prepare the birthing place (Here in Switzerland, the birth center is like a studio apartment within a senior midwife’s home) and we were to meet her there as soon as we were packed up and ready. Our son woke up at 2:30, and we headed out the door, down 12 flights of stairs in our building (my husband was petrified that the elevator would malfunction just at the moment where we needed to get tot he birth center, lol.). We dropped off our son, and headed in tot he birth center. As soon as he was out oft he car, I turned on Easy First Stage on my ipod and went to *off*. I remained in off until we arrived, and the car ride was not a problem at all.

We arrived at the birth center at 3:15, and I was really needing to  concentrate during the PWs. I stayed in center, as I felt a need to move during/between PWs and couldn’t be bothered with my switch. I experienced about 8 PWs on my knees with my upper body supported by a birth ball while my husband applied counter pressure to my lower back. These were very intense, and yes, even painful, but I never felt out of control like I did wtih my son’s birth. I continued to use Peace and Relax with great success, although my husband had completely forgotten that he could be giving me the Relax cue as well. It worked just fine with me saying it to myself.

My water broke at 3:45, and my midwife said something about how things might pick up a bit in intensity from now on. I decided to get into the birth tub, which she had filled for me. The feeling of my water breaking was a strange sensation, but not at all painful.

I got into the tub, and took off my ipod because it was annoying me with the cord and worrying about it getting wet. I had one PW while kneeling in the water with my arms resting on the side oft he pool, and it was downright painful. I felt immediately nauseous afterwards, which set off an alarm in my mind about transformation, but I thought I was being WAY too optimistic and so didn’t believe I was in transformation. I asked that someone apply counter pressure to my back with the next wave, which my husband did, and it was better, but still VERY intense. My midwife asked if I felt pushy at all, which I thought was ridiculous, since I thought I was just beginning active labor. I said that I felt *something*, but that pushy wasn’t the right word. And then, the next wave hit. I started out in the same position, but instictively straightened out my back so that I was kneeling but compeletely upright, then without having any ability to control it, I began making the craziest scream/cry/yell/moan that I’d ever heard.

Amazingly, a part of my brain was still able to think, gee, when  women make this noise in birth videos, it’s because they are pushing the baby out.  Weird!” It was incredible- while I was making this noise, the pain disappeared, and it was just INTENSE… pressure isn’t the right word…. Just INTENSE. I would make this noise until my lungs emptied, take a deep breath, and do it again.

I instinctively reached down, and felt my baby’s head slide right out into my hand. The midwife then helped a tiny bit with the shoulders, and the baby was born… all within this one minute, one wave, and without me ever feeling like I was consciously pushing. My midwife hadn’t even bothered to put gloves on yet! I brought the baby out oft he water and onto my chest and IT WAS A GIRL!!! So exciting. She was healthy and pink and cried after a minute but calmed right down.

She nursed within 15 minutes or so, and the placenta was born about 45 minutes after the birth.

My thoughts on Hypnobabies:

I honestly never believed in a pain free birth while practicing my Hypnobabies.

Perhaps because this was not my first baby, and I’d already been there and experienced the pain of birth. What I wanted from  Hypnobabies was control over my expereince, which I felt I didn’t have with my son (hospital birth, malfunctioning epidural, panicking, etc).

Ultimately, I did experience some pain/discomfort, but it was only in the last 2-3 waves. My midwife guesses that I arrived at the birth center still dilated to only 2-3cm, but that my water breaking caused a dilation from 2-10 in just 2 waves. So I guess a little pain is a fair trade for such fast dilation!

The Easy First Stage was AWESOME in the car, but I found it  distracting once at the birth center.

The Peace and Relax cues were WONDERFUL for me, but once I got into center, I didn’t continue to use my lightswitch tool.

I would highly recommend this program to anyone else, but think it is very useful to also read a book such as Active Birth to learn coping strategies in addition to hypnobabies to help speed labor along and remain comfortable. I believe Active Labor is recommended in the home study course as being very compatible.

I wish you all great births !!!