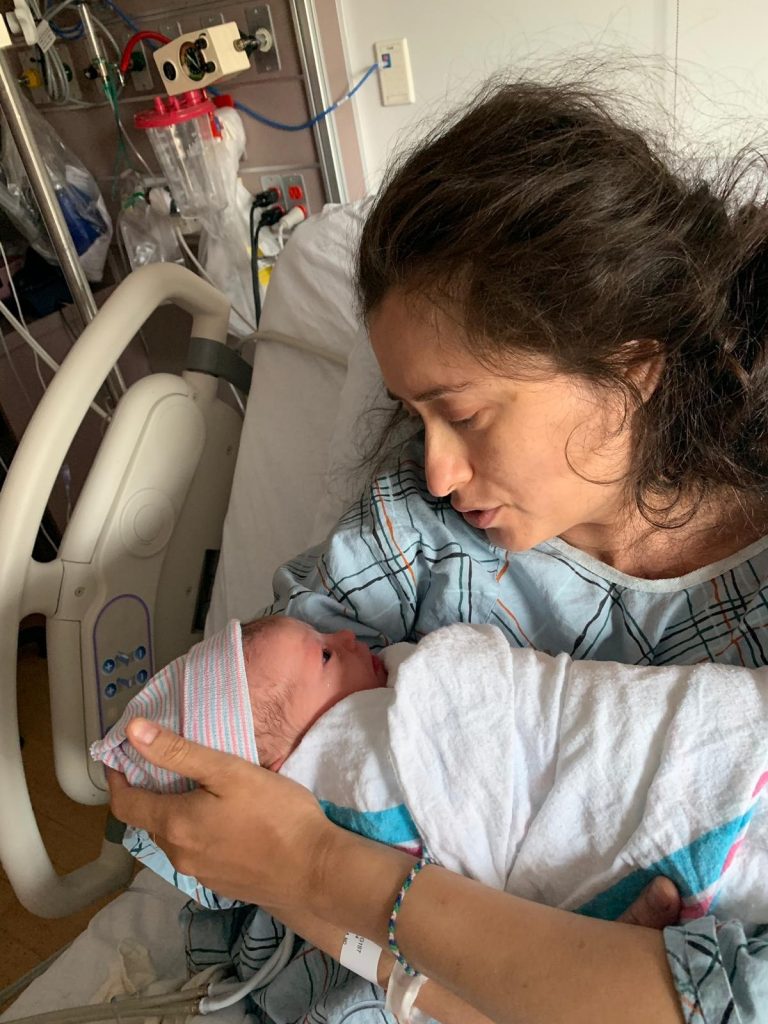 “Even though I ended up getting an epidural, I can honestly say that Hypnobabies made a huge difference for us – I was calm and confident heading into (and throughout) the birthing time.

I didn’t have the 100% natural birth that I had hoped for, but I am still happy with my experience and firmly believe that Hypnobabies played an important role in what went well. 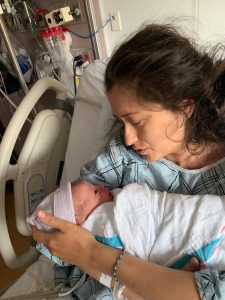 I agreed to an induction at 41 weeks. I had mixed feelings about this as I had wanted things to unfold naturally, but in the end, I didn’t feel comfortable going against my doctor’s recommendation. Heading into the induction, I had a “wait and see” attitude about pain management, as I knew that Pitocin would likely make my birthing waves (Hypnobabies word for contractions) much more intense than they would have been if I had let my birthing time start naturally.

Driving to the hospital, I recall feeling strange knowing that we were headed to our daughter’s birth, and yet on the surface, everything appeared so normal. After checking in at the maternity ward, my husband and I sat in the waiting area sipping tea and reading, perfectly calm and relaxed. I had very little idea of what to expect from the next few hours, but I felt confident in myself, in my doctor, and in the care team at the hospital.

We started around 10 pm. I was already around 1 cm dilated so they decided to try a Foley balloon to ripen the cervix. I recall the insertion was rather uncomfortable. I then experienced some pretty intense menstrual-style cramping that had me running for the bathroom every hour or so. At one point, I vomited from the discomfort. My husband was standing over me then and I think he was scared. After a couple of hours, I discovered that a hot water bottle against my lower back tamed the sensations enough so that I was able to rest and I think at that point I put on the “Easy First Stage” (Hypnobabies main birthing time track) track to calm my mind. I was able to sleep for several hours, on and off, before the doctors came back to check on me.

After examining me, the doctors were pleased with my progress – I was 4-5 cm dilated. They decided to remove the balloon (that was such a relief, I didn’t like having the tubes sticking out of me) and monitor my birthing waves. They said that I was having a wave every 2-3 minutes or so, but I didn’t notice them. At around 8 am, my doctor checked me and found that I was 5-6 cm dilated. She remarked to her aide, “this isn’t a Foley presentation” which I understood to mean that I was doing well. At this point, they hadn’t administered any Pitocin yet. I was feeling hopeful that maybe I could get through the birth without it, after all!

A little while later, the doctors determined that my birthing waves were spacing out to around 2-5 minutes apart and decided to administer some Pitocin. As long as I had the hot water bottle at my back and “Easy First Stage” playing in my ears, I honestly felt no discomfort whatsoever. One of the nurses remarked to me, “you don’t feel anything at all? You are doing amazing!” She later asked me if I was using Hypnobabies 🙂 I continued this way for a few hours.

At 12 pm, my doctor checked me again and found that I was still at 5-6 cm, and the cervix seemed firmer. At this point, she said that we needed to “crank up” the Pitocin and insert a uterine catheter to monitor the strength of the birthing waves. At this point, my doctor recommended getting an epidural. I was so disappointed, as things had been going so smoothly up until that point. My discomfort levels had increased from around a 1-2 (on a scale from 0-10) for most of the morning to around a 3-4, which was still quite manageable, but I was apprehensive about what the increase in Pitocin would bring about. Within a few minutes, my discomfort during the height of each wave was around 8-9.

I decided to get an epidural when a doctor arrived to insert the uterine catheter. I had found the Foley balloon so uncomfortable; I wasn’t sure if I could manage having another device hanging out of my body, along with the discomfort from the pressure waves. I didn’t know how many hours of birthing time (Hypnobabies word for labor) I had left, and at that point, I had been awake for perhaps 30 hours and was very tired. My husband was reluctant for me to get an epidural, as was I. I felt like I was “giving up”, that I was weak, that I was letting myself down and that my husband would be disappointed in me. In the end, it was a decision that I made on my own.

The anesthesiologist arrived quickly. At this point, my discomfort levels were reaching a 10 at the height of each wave. I breathed deeply and slowly and held onto the nurse and my husband for support. The relief from the epidural was very fast. At this point, I was able to rest for several hours. I almost put my hypnosis tracks away, feeling that I had “given up” on a natural birth, but I decided to listen to “Easy First Stage” one more time, willing my body to soften and open even though I could no longer feel the waves.

Around 4:30 pm, my doctor found that not only was I fully dilated, but I also had maybe 1-2 cm extra! It was time to start pushing. I am a naturally athletic person and had always assumed that the pushing phase of birth would not be a problem for me. Thankfully, I was right – I only pushed for an hour or so. Toward the end of pushing, my doctor was concerned about dips in the baby’s heart rate following each pressure wave and alerted me that she may need to do an episiotomy or vacuum extraction to speed things along. Luckily I had maybe 1-2 more pushes left at that point and she never needed to do either of those interventions. I ended up with a “small” tear (though I don’t know the degree, this is something I need to ask my doctor) – maybe 3 or so stitches visible from the outside.

It was a miracle when my doctor pulled my daughter out and placed her on my chest. Her birth, though not exactly as I had hoped for or imagined, was successful from my point of view. Almost two weeks later, I am mending well and she is breastfeeding up a storm. We had very little problems falling into our groove with breastfeeding (one of my main concerns and motivations for pursuing a natural birth). Even though I ended up getting an epidural, I can honestly say that Hypnobabies made a huge difference for us – I was calm and confident heading into (and throughout) the birthing time, and I avoided getting an epidural for over 12 hours. Knowing how epidurals can slow down birthing progress, it’s possible that the birthing time would have been much longer if I had opted for one from the beginning. Finally, listening to “Easy First Stage” in the hours leading up to pushing probably helped my body relax and open more quickly than it would have otherwise.

I should mention that I wasn’t exactly the best student of Hypnobabies. I was still working full time up until 39 weeks, and so while I made a best-effort I didn’t always fit in each daily track, affirmations, and practice session (averaging maybe 2 out of 3). I didn’t engage my partner in practicing with me. I also didn’t engage my doctor or the care team at the hospital for their support. I am sure that I would have experienced even more relief from Hypnobabies if I had practiced it more fully.

I’d like to believe that I could have gone without an epidural if I had let my birthing time start naturally. In the end, I wasn’t mentally prepared for being induced (I honestly never expected to get to 41 weeks!). Deep down, I didn’t believe that natural pain relief could match the artificial intensity of birthing waves brought on by Pitocin. Maybe that’s not true for everyone. But, I still feel strong!