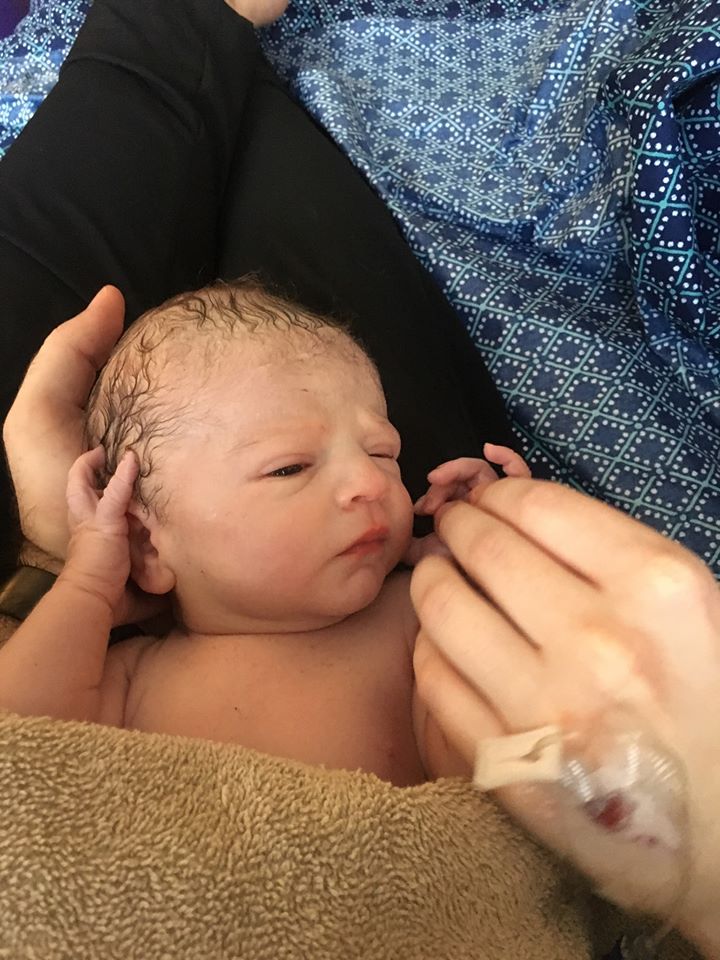 “I remember at one point hearing my midwives say they couldn’t tell when my waves were coming because I was so relaxed, and my doula agreed even though she was touching me! They all told me I was one of the calmest first-time moms they had seen during their birthing time.” 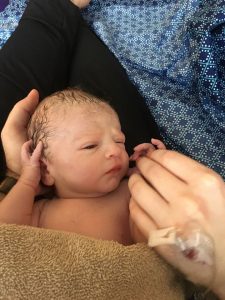 I started having pre-birth waves (Braxton Hicks) at 37 + 5 weeks. My husband and I had sex and I felt some pressure waves (Hypnobabies word for contractions) of and on, then it got more intense, even after a bath. I’d had practice waves a lot before but these definitely had more pressure and started coming more regularly. So, I told my husband this might be my birthing time (Hypnobabies word for labor) but probably not since I’m an FTM and most go to their guess date and beyond. My sister had both of hers at 42 weeks so I was prepared for the long haul.

That night the waves petered out after I drank some water and lay down.

At my prenatal appointment a few days later, I had a cervical check and they asked if I wanted to know where I was at. I said no at first because I didn’t want to hear something like “1 cm and 0% effaced. That baby will be there for a long time!”. My midwife, Sarah said “Are you sure? You did just have bloody show when I did the check!”. So, I gave in and found out I was 4cm and 50% effaced! Sarah said, “I never make predictions like this but you’ll probably give birth in the next 48 hours”.

So, I was super excited and warned my boss I could drop off at any moment. But there was a problem. We were right at the end of a kitchen renovation and the last thing I wanted was contractors in my house while I was in my birthing time.

My appointment was Wednesday, and we finished up renovations Saturday. Every night from Wednesday on I’d wake up several times from 1-5 am with practice waves, but they’d always quit around 5 and I’d get some sleep. Saturday afternoon we had sex again hoping to encourage baby to evacuate the premises. I started having pre-birth waves again late that evening but lay down to get some sleep and hopefully slow them down until morning. Around 5 am I couldn’t sleep anymore so I drank a glass of water and took an Epsom salt bath. They stopped after that and I slept in really late the next day.

Sunday we went out for brunch as a final hurrah before baby. Around 8 pm that night I started having waves. By 9 they weren’t regular, but frequent enough to call and warn my doula and midwife. But 9:30, I knew it was my birthing time and asked to go ahead to the birth center. My midwives live an hour away and my waves still weren’t super regular, although they all were within 8 minutes of each other. I was GBS+ and was doing an antibiotic IV, so my midwives had told me to come in at 5-7 min apart instead of the standard 3-5 min so we could start antibiotics. We agreed to meet there at 10:45, and I told my doula, Kali, to meet us there too. 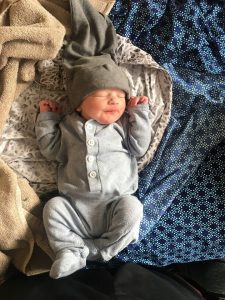 The car ride was actually very peaceful and comfortable. I had my headphones in playing my “Easy First Stage” hypnosis track (Hypnobabies main birthing time track)and was completely calm and comfortable for the 15-minute drive there.

We walked in the birth center and met the midwives at the base of the stairs to the birth room. I smiled at everyone and said hello and one of the midwives, Sarah said: “that’s scary”. She later told me she thought I had come in too early because I was so calm, but we walked upstairs and they checked me and I was at 6 cm and 100% effaced. The first thing I wanted to do was get my pants off! Then I started having waves mostly on the padded rug on hands and knees, and at this point, my back had a lot of pressure with each wave so I asked Kali to do some counter pressure and that helped a ton. She was also using a hot rice sock and rolling it up and down my lower back, which relieved a lot of pressure. After a while, I wanted to try the birth tub so I asked for it to be filled. At some point, while waiting I tried to lay on the bed and rest some but I just ended up barfing instead. I was not a fan of being on my side and didn’t get in the bed again except to do cervical checks.

When the tub was ready I stripped down naked and got in. It felt wonderful at first but after an hour or so the water had cooled, my waves were too strong and I needed more antibiotics so I got out.

At this point, I was 8cm dilated. From here on I was mostly on the birth ball or all fours with a heating pad and pressure from my doula on my back. I’d do hip circles or pelvic tilts in between waves, and as I felt them coming get into a relaxed position and breathe deep and slow through each one. After an hour or so, I was checked and was fully dilated. I went to poop after the check and felt like I was really bearing down while on the toilet, then I felt my body push. I sat there for a second, stunned, then yelled that I thought I just pushed. They came to check on me but the next few waves I was just bearing down.

They then told me we were going to do some lunges. They got out a little chair, had me put one leg up on it and lunge back and forth through waves. After a couple of these, I felt a push so strong that I projectile vomited all the food and water I’d had during my birthing time all over the floor! Apparently the lunge was effective. I switched to the rug and worked through the waves rocking on all fours but I wasn’t really pushing so I started doing kneeling lunges as they came and making an “Ahhhh” sound like the “Pushing Baby Out” track (Hypnobabies special hypnosis track for easier pushing) was suggesting I do, then I’d rest in between in puppy pose while my husband rubbed my neck. That helped a ton and soon I started pushing again regularly with the waves.

I never did have to be told when to push, it’s like my body just took over and all I could do was surrender to it. After a while, I was getting tired with that active pose and the pushing slowed down. My midwives suggested getting on the toilet for a bit and that had an immediate positive effect and I started pushing a lot more and harder, and eventually, I was making this loud guttural roar with each one. At this point, they told me to reach down and feel his head! The next wave hit and they realized I was about to birth him into the toilet. So, the midwives stood me up and we all made a mad waddle dash back to the rug. As soon as they got me down I had another pushing wave and pushed the whole baby out in one push!

The midwives maneuvered him right under me and he was immediately screaming, then promptly peed all over my left leg and belly. Tears were streaming down my face. It was immediate physical relief and intense emotion all in one.

They rolled me over and put him on me for skin to skin and we snuggled for a bit while I birthed the placenta. After that, they moved us to the bed and we snuggled for the first couple of hours and I nursed him a bit before they did the weighing, measuring, cord-cutting and other newborn stuff. Then they stitched me up, helped me pee, and massaged my uterus (which I used my “Release” hypnosis cue for) and we were both doing really well so they let us go home about 4 hours after he was born.

I remember at one point hearing my midwives say they couldn’t tell when my waves were coming because I was so relaxed, and my doula agreed even though she was touching me! They all told me I was one of the calmest first-time moms they had seen during their birthing time. My hypnosis started to slip only twice and my midwives would touch my shoulder and use my “Relax” cue (Hypnobabies hypnosis cue to deepen hypnosis) and I would immediately feel relief and fall back into deep hypnosis.