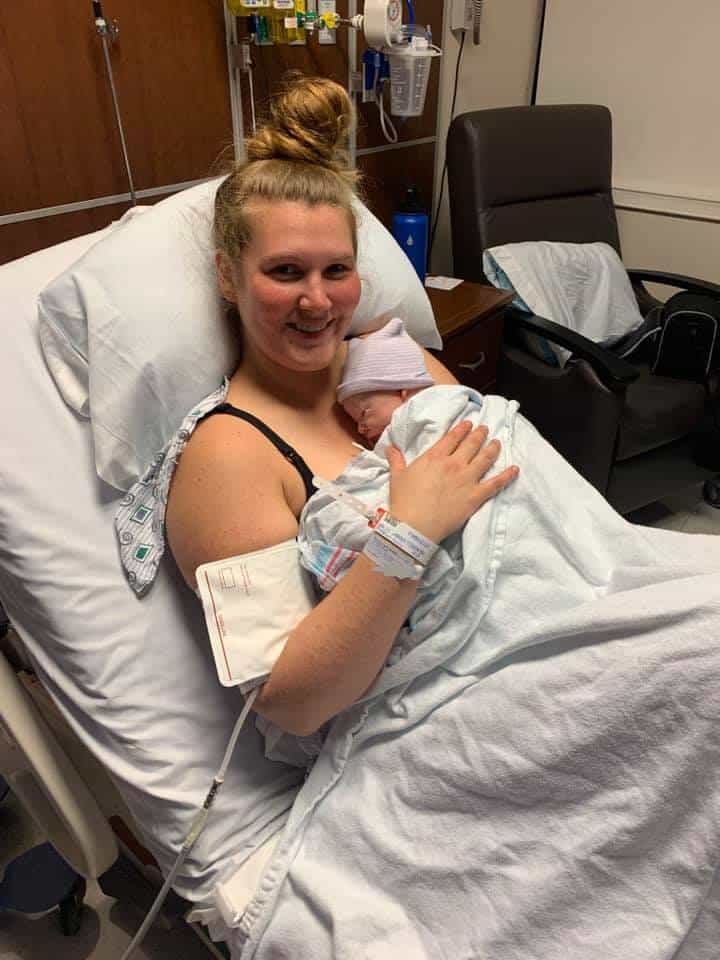 “I listened to Easy First Stage (Hypnobabies main birthing time track) which helped a LOT with my anxiety and the pressure waves which were still fairly consistent. The nurse came back around an hour and a half later at which time I was at a 5-6.”

According to my OB, I was in the early stages of my birthing time (Hypnobabies word for labor) the Wednesday before Sebastian’s arrival. I opted to do a membrane sweep which I did not find to be overly uncomfortable. I was also dilated to around 3-4 and 90% effaced at that point. I’d been having pressure waves (Hypnobabies word for contractions) on and off for the past week and those continued. I woke up Saturday morning to my “bloody show” (such an unfortunate name). My husband was working an early morning bonus shift and slightly freaked out but I reassured him that my pressure waves hadn’t changed. He went on to work and I continued to experience pressure waves throughout the day though they weren’t timeable. I felt a lot of pressure in my hips and pelvis but I’d been feeling that for several weeks as baby boy was SUPER low the entire last 2-3 months of my pregnancy. 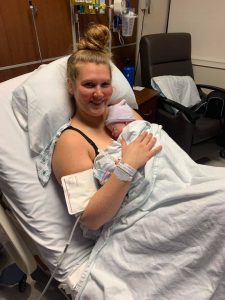 I woke up the next morning to more of “the show” and noticed more pressure in my pelvic area. My OB had made the comment several times after checking me that Sebastian’s head was so low, she was surprised it didn’t feel like he was going to “fall out”. I had laughed at the time but this somewhat described what I was feeling. However, my pressure waves remained inconsistent so my husband and I went about business as usual. We went to Costco and Whole Foods for groceries and I did notice that I couldn’t walk as fast as normal because of the pelvic pressure. Upon returning home, I laid down for a while and listened to Fear Clearing (Hypnobabies track to release any fears) to try to get some rest. I then began timing my pressure waves and noticed that they were about 6-8 minutes apart. I’d downloaded an app that tells you when to go to the hospital and as I tracked my pressure waves, it kept telling me it was time to go.

I’m a fairly stubborn person and I had my mind made up that my husband and I were waiting until my pressure waves were roughly 4 minutes apart. I wanted an intervention-free birthing time and I wanted to experience the majority of it at home to improve those chances if possible. I very casually told my husband that the app had said we needed to go but that I wanted to wait. This was around 2-3 pm. By 4:30, my pressure waves had become 4-5 minutes apart and my husband suggested we go to the hospital. Worst case scenario, we get an update on progress and come back home. Thankfully, we only live roughly 10 minutes from the hospital.

Upon arrival, they checked us into an L&D room. When they checked me, I was 4cm dilated and over 90% effaced. The nurse told me they wanted to keep me for a while to observe and see if I made any progress. I was agreeable but told her that if I hadn’t progressed, I was going home because I had to go to work the next day. While waiting, I listened to Easy First Stage (Hypnobabies main birthing time track) which helped a LOT with my anxiety and the pressure waves which were still fairly consistent. The nurse came back around an hour and a half later at which time I was at a 5-6. My husband and I made the decision to stay at which time I told the new nurse during shift exchange that I didn’t want an epidural and I also requested intermittent monitoring so that I could walk around.

She was so supportive and encouraging. At that point, my husband and I went and walked a few laps around the L&D area. Upon returning to our room, I sat down and began listening to Deepening Your Hypnosis (Hypnobabies track to deepen the level of hypnosis) as my pressure waves had gotten a little more intense. After a couple of hours of alternating walking and listening to my tracks, my nurse came back in and asked if I wanted to be checked again. I was agreeable and was pleasantly surprised to hear that I was at an 8-9cm. We joked back and forth that my water likely wouldn’t break because my sister’s hadn’t with her two kids and neither had my mother’s with either of us. I told the nurse I wanted to use the restroom and then go walk some more. I was that comfortable and relaxed! 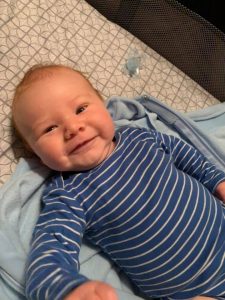 As soon as I sat down on the toilet, my water broke. I called for my husband and told him and he went to get the nurse. From the time my water broke on through my birthing time, my pressure waves became much more intense and uncomfortable but still manageable. I echo what others have shared on here in saying that my body took over and did what it knew to do. I attempted to listen to my Hypnobabies tracks but could not focus and instead focused on my breathing. I breathed through pressure waves while standing by the bed for several minutes. The midwife on call came in and told me that if I felt like I needed to “use the bathroom” or “push” to call her back in. Almost as soon as she left, I told my husband that I felt like I needed to push. I climbed on the bed, kneeled with my arms resting on the back, and began pushing. After about 30 minutes and a flip to my side, I was able to push my sweet Sebastian out into the world. It was the most beautiful, insane, and primal moment of my life. We arrived at the hospital at 5:30 pm on the 6th and he was born at 12:10 am on the 7th.

Even though I wasn’t able to use my Hypnobabies tracks during pushing, I 100% think they helped me manage anxiety throughout my pregnancy (I started the program at 30 weeks). They also got me through the most uncomfortable part of transformation (Hypnobabies word for transition). I am so thankful for this program and the Hypnobabies Support Group!