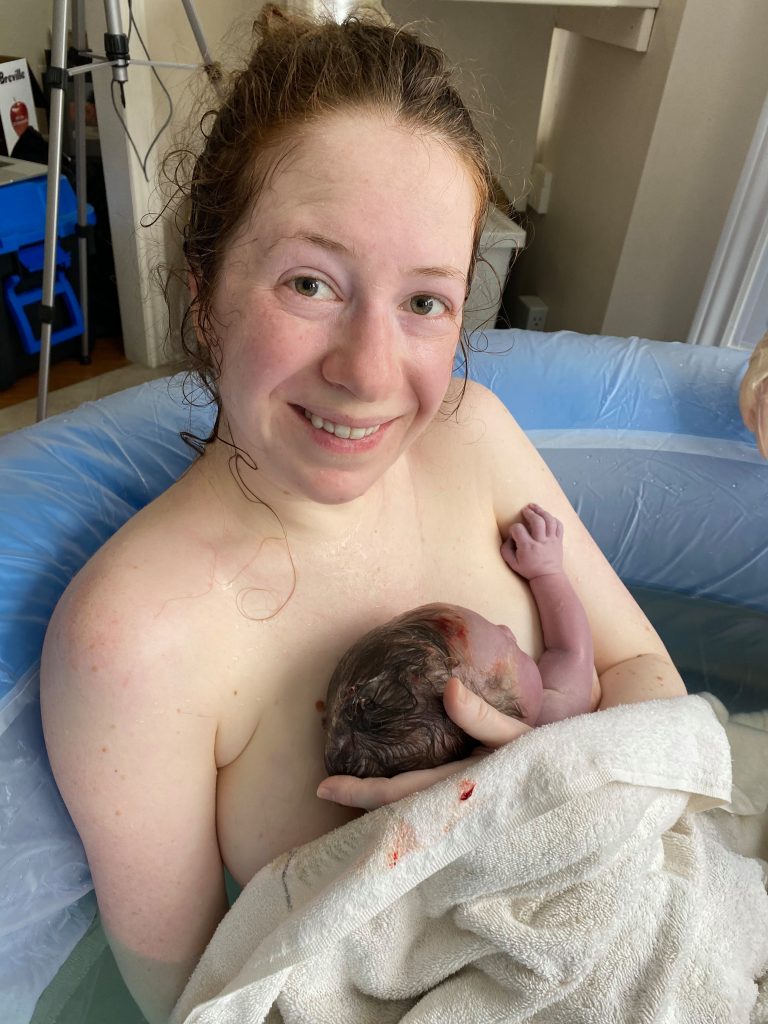 “I was sooo relaxed and so happy. It was just so peaceful. I heard my doula and midwives awing over how beautiful and happy I looked. My husband says I was smiling. During my pushes, I made any noise that my body came up with, hisses, grunts, growls. I remember letting baby slip back in me at the end of each push, telling myself to let my body relax and let my body slowly, gently, let baby be born.”

My beautiful, peaceful, quick and easy, and sometimes amusing birth story (First baby, home water birth, not quite as planned, but turned out perfectly): 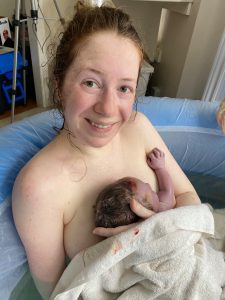 I was under midwifery care in Canada and was planning a waterbirth at the birth center, with a home water birth as a backup option in case of snowstorm or if I change my mind about the 20-min car ride to the birth center (something I was apprehensive about). We had rented a birthing tub and received it Friday. We set it up Saturday morning and discovered the tap adapter that came with it didn’t fit our kitchen tap. We ordered a new one for curbside pickup, available Sunday. By chance, it was available, and we collected it Saturday.

Saturday night, I was 38 weeks +1 day pregnant. I hadn’t had any signs that birthing was imminent, at least none that I recognize. Baby had lots of hiccups and had been squirming that evening, but no waves (Hypnobabies term for contractions). We went to bed and I put on my maintenance track, which I was always listening to just before going to sleep. Afterwards, I put on my Joyful Pregnancy Affirmations. At 11:30pm, just a few minutes into the track, after hearing “you are going to have such an easy and wonderful birthing”, I hear a “Pop!” sound. Confused, I say to my husband “Did you hear that?”, he says yes, and then suddenly I felt warm water gushing out between my legs. Alarmed at my waters breaking, I leap out of bed and what was gushing became a dramatic waterfall on my bedroom floor. My husband said “Should I get a towel?” And I replied, “More like a bucket!!”.

I had just discussed with my midwife a couple days before the fact that my water breaking before birthing time, especially if there is meconium, may become a reason to go to hospital. We thoroughly check the towels and the bucket for poo, but only saw a slight pink tinge. My husband called the doula to let her know and I decided we should go back to bed and try to sleep. We were both shaking from the adrenaline. After about 10 minutes, the waves started. They were mild, like period cramps, in my lower abdomen. Excited, I turned on the Your Birthing Time Begins playlist I’d prepared on my laptop to listen to in bed. At the end of those tracks (~2 hrs later), it was clear this was birthing time (Hypnobabies term for labor).

My husband had been tracking my waves by watching my hand for finger drops (Hypnobabies technique for entering hypnosis) and listening to my breathing. They were so gentle, I usually had to tell him after they passed, and I could go to center (Eyes-open hypnosis technique) that I’d just had one. They were not regular, coming 2-10 minutes apart. I kept resting in between, still trying to get to sleep. My husband spoke to my doula on the phone and since the waves were already so close, my husband and she decided that she should start heading over. In the meantime, she reminded us that we could use the TENS machine in conjunction with my Hypnobabies.

My husband put the TENS on me while I was lying down, enjoying my waves. She had told me previously to set it to a level I enjoy and to consider pushing the “boost” button as my finger drop. I also discovered while using it that the electric pulses became my physical sensation of hypno-anesthesia. During a wave, I would go off while I hit boost, feel the current running through my back and visualize my bright orange hypno-anesthesia spreading through my body from back. The doula arrived about an hour later at around 2-3 am. By that point, I was no longer enjoying experiencing my waves lying down but had the urge to move during my waves (in center) and then relaxing and resting in between on the bed. When my doula arrived, I explained my approach and she had me turn off between waves and stay in center during waves.

I continued using the TENS, now hitting boost at the start of each wave as I went into center. I would then lean against the wall, swaying my hips, during each wave. As they got stronger, I also enjoyed sitting on the birthing ball. When they were strongest, I loved sitting on the ball and leaning back against the bedroom wall, against a corner (kind of hard to explain but this let me relax). I tried to go completely off between waves and to sleep for those couple minutes, but anytime I laid down or forward onto a stack of pillows, it would incite another wave right away. I was getting in and out of bed over and over, which is challenging when pregnant, especially when I wanted to be fully up before the peak of the wave arrived. My doula was watching me from the corner of the room and making sure my water glass was full. I drank so much water and also ate fruit and granola bars (sometimes chewing and swallowing during my waves — that’s how in control and comfortable I felt).

My doula told me she and my husband had paged my midwife. I felt bad about this because my midwife had said to only page once I was past 4-1-1, and not earlier, since it would be still a while after that point. My midwife spoke to me on the phone, including during a wave, and said it sounded like it was still early on since I was able to hold a conversation during them. I continued doing my thing and at 6 am or so, I started to have pressure in my tailbone/rectum and even stood up from the birth ball when I felt something pushing down into the ball (my tailbone was broken years ago and pointed upwards in my body. I think baby might have fixed it for me in this moment!). In my mind, I was still in early birthing time, listening to enlightenment music track (Hypnobabies relaxation music) and the Easy First Stage (Hypnobabies main birthing day track) track back and forth the entire time, trying to rest and preserve my energy.

My doula then told me that she had told the midwife to head over and suggested I let her know when I wanted to start filling the tub. I didn’t want to fill it too early because I wanted it to me warm. I also asked why the midwife was coming, since it was so early on. My doula had to give me a bit of a reality check and told me I had been having waves consistently every 3.5 minutes for the past hour. She says things are going fast. I was encouraged by this and was happy how easy and comfortable things were. I kept relaxing, deep in hypnosis, resting my body and my mind, letting my birthing happen. I kept saying to myself “open.. open.. open” the entire time and my body listened. My doula started filling the tub at 7 am and we discovered my water pressure is sloow. This meant when I decided I was ready to get in, it wasn’t ready and so I stayed on my birthing ball. When it was finally ready, it was already 9:30 or so. I head downstairs to the kitchen between waves. My doula suggested not getting in until my midwife arrived, since she would want to do a cervical check.

I kneeled on a camping mat with my body slumped against the tub, breathing through my waves. I was soooo keen to get into that beautiful water and so I kept asking where the midwife was, feeling a bit frustrated. That was when I had my first push, feeling a heavy pressure in my bottom. After that, I was really frustrated and said rather sternly “Where is Jess?!?(My midwife), I’m feeling pushy”. Noticing my frustration, my doula guided me to my special safe place, describing it in detail and asking me if I felt the warm morning sun shining on me, heard the wind in the grass, etc (all parts of my special safe place). It worked beautifully and it made me feel patient again. My doula says I went through transformation (Hypnobabies term for transition) when I was in my special safe place, and I have to believe her since I didn’t notice.

Jess arrived as I was leaning on the side of the tub having a wave. She spoke to me during the wave (she didn’t realize it was happening because I was so calm), and I ignored her until it passed. I then told her to check me NOW when the wave ended. It took a short moment and my doula said that it was soo obvious I was fully dilated. After being told that I’m definitely fully dilated, I asked if it was safe to push. My midwife said yes, but that she would prefer if her second midwife was there. I said “Well that’s on her “as I climbed in my tub. We had the birthing tub set up in the kitchen in front of the bay windows looking out onto snowy backyard. It was just after 9 am. I announced that I needed the Pushing Baby Out track (Hypnobabies track for pushing) on speaker and husband started blasting it because it wasn’t loud enough at first. I didn’t actually consciously listen to the track, instead I just kept my focus inward, staying relaxed and trusting my body.

As the waves would arrive, I would pull myself around the side of the tub, trying to burn off the intensity. In between, I floated around the tub on my back, the morning sun shining on me, feeling like I was at a glamorous Nordic spa. I was sooo relaxed and so happy. It was just so peaceful. I heard my doula and midwives awing over how beautiful and happy I looked. My husband says I was smiling. During my pushes, I made any noise that my body came up with, hisses, grunts, growls. I remember letting baby slip back in me at the end of each push, telling myself to let my body relax and let my body slowly, gently, let baby be born. I could have born down and pushed baby out quickly, but I didn’t want to. I don’t know how many times my body pushed (I didn’t do it purposefully), maybe 10 times? Baby’s head was born, and everyone said hello as I floated around relaxing. Shortly later he was out and in my arms. Total birthing time was 10 hours 50 min from the “big pop” to baby in my arms. Active birthing time was 2 hours 20 min from 4-1-1. We had planned on going to the birth center, but in the moment, there was no time and there was no way I was going to get into a car while pushing. I am so grateful that I had the easy, quick, peaceful, beautiful birthing that I hoped for. Thank you Hypnobabies I did have moments during my training when I doubted the program’s efficacy. I am so impressed that it worked as beautifully as I hoped. I feel so blessed