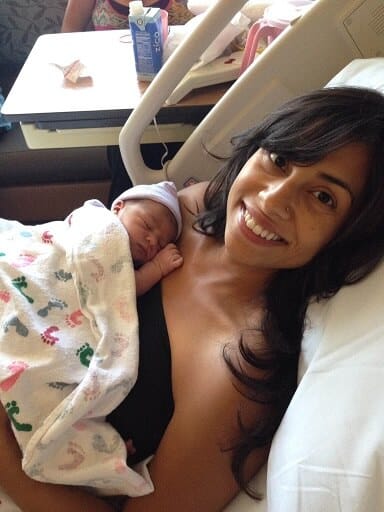 Thanks to our Cyber Tuesday winner Deanna Blankenbiller for sharing her birth story with us!

“I have to say that I was so euphoric after giving birth, not simply for meeting my sweet babe, but for having such a empowered and comfortable birthing experience.” 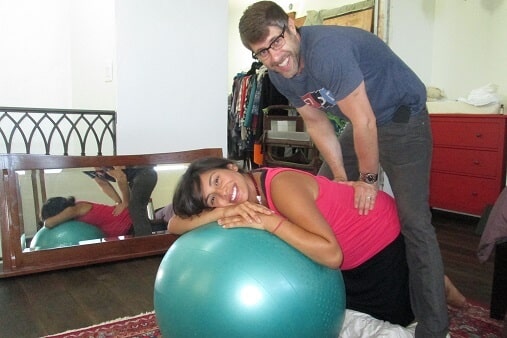 On Sunday morning, 7/6/14 I woke up and mentioned to my husband Matt that our baby would be here in the next day or two. My Braxton Hicks were more steady, though not frequent, and my gut said things were changing from practice to the real event.

Matt and I spent the day together watching movies and running errands. In the evening we took a long walk, the same one we’d taken throughout the pregnancy. We talked about how this could be our last evening we’d have before we finally met our baby. We went to bed pretty early, in case my pressure waves picked up over night or the next day, we wanted to be well rested. Around 2 am I woke up with stronger and more consistent pw, and decided to start my hypnosis tracks- just in case they didn’t subside. I listened to the tracks easy comfortable and special place until 5 am, when I decided to get back in bed and watch the morning news to loosely time my pw. The pw’s were about 7-10 minutes apart so I cuddled up with Matt and told him that he probably shouldn’t go to work today. At 7am I decided to make breakfast downstairs, at this point we planned to take a walk, but then I realized being at home and close to the birthing ball was better for me. I noticed my waves were now 3-5 minutes apart, but still felt very easy. I showered, dried my hair, applied my makeup (while on the birthing ball), and got dressed. The waves were becoming more intense, but still felt easy- especially with the use of my peace cue. I kept envisioning my switch moving to off, and warm hypno anesthesia flowing throughout my body. At 9am Matt began timing my waves more consistently, and I parked myself on the bedroom floor with the bball figuring I’d be here for a while. We called my friend Veronica who soon came over to encourage & support me and Matt. The next two hours passed very quickly, my pressure waves were steadily two minutes apart and one minute long for most of those two hours. I felt that the waves were stronger as the time went on, but very bearable, especially when I used my peace cue. I was chatting and laughing with Matt and Veronica between waves and kept wondering when we should leave for the hospital. Since we were birthing our baby at a hospital that is notorious for interventions and that has a very high cesarean rate, I was very reluctant to head in too early. In fact, I had been admitted twice to the hospital in the past week for low fluids and had to defend our choice to not induce during our first stay, and our decision to not proceed with more intervention after being induced on our second stay. I used the Benefits, Risks, Alternatives, technique we learned in class, and knew that our baby wasn’t in danger.

Around 11:30am my waves began to feel much lower and I decided it was time to head to the hospital. Matt and Veronica helped get me into the backseat of the car, where I continued to listen to my hynosis tracks. I have to say the 15 minute car ride was the most uncomfortable part of my birthing time, partly because I was off my birth ball, and partly because I now know that I was in transition. Arriving at the hospital I insisted that we park and walk in together rather than getting dropped off. It was very important for me to do the things that helped preserve my bubble of peace, especially since it needed to be strong for the hospital. Matt and I walked to triage, after stopping a few times along the way to for me to drop down into hypnosis. When we got to triage I explained to the attendant that today was my baby’s birthday and we were ready to check in. She asked a few questions, including if this was my first birth, and then she told us to wait. I wasn’t sure why we were waiting, but I was relieved that the place seemed relatively quiet and calm. I continued to drop into hynosis in the lobby, and was leaning on Matt when my waters broke. We told the nurse my waters had broken, and she half jokingly said, “I guess that will get you a bed”. No one seemed at all eager to check me or ask me many questions as I was being taken to an enclosed curtain area. After taking my vitals, the nurse said somene would be back to check my progress shortly. At this point, my waves were very strong and I began bleeding, which did make me a bit nervous. I was still using my cues, but it felt good for me to use low sounds with each wave, I kept repeating, “peace mama, peace”. I was slightly embarrassed since I knew other moms were behind their own curtains, being very quiet and I didn’t want them to feel scared by my low moans and cue words! We waited for about 10 minutes, then after going to the bathroom I told my husband I felt like I wanted to push. He quickly found a nurse to check me, but was sure to tell her that I didn’t want to know how far dilated I was. The next thing I knew she quickly exited the curtain area and then the mild chaos began. Less than a minute after the nurse exited my curtain area she returned and quickly flung back the curtain, and ushered me into a wheelchair, I wanted to protest and ask to walk, but seeing her quick pace suggested I needed to move. The next thing I knew she was practically running me down the hall and to the elevator to get me to a birthing room, other nurses were holding open doors and clearing the way for us to move quickly.

The moment we entered the birthing suite I told the nurse I wanted to push, and asked her to please set up the birth bar. She said I was welcome push as I needed and that the doctor was on her way. The birthing room nurse was different from the nurse who escorted us upstairs, and though she was told I didn’t want to know my progress she couldn’t help question my escort nurse, ” she’s already at 10?!” I heard how far along I was and smiled at my husband! We had done it- arrived at the hospital with not much time for intervention! I began to push as I felt necessary, while kneeling on the bed and holding on to the birth bar. The doctor arrived and said baby would be here shortly but wanted to review our birthplan quickly first. She had a few minutes to review the plan before sitting down and getting to work. The baby was definitely close, and the doctor encouraged me to modify my position since at the rate baby was coming she wanted to have the opportunity to try and minimize any tearing. I pushed as my body was telling me, while husband kept encouraging me and repeating my cue words. At 12:39pm, after what felt like only a few minutes our sweet baby was born, and Matt announced we had a daughter! Lucia was immediately placed on my chest, while we waited for her cord to stop pulsing and the placenta to be birthed. After the placenta was out, the doctor congratulated us on our birth, and said though I had a tear, she was impressed with how calmly I was as a first time mom who wasn’t using any anesthesia.
In the hour after Lucia’s birth we had to sign the consent paperwork and fill out the forms we didn’t have a chance to fill out before she came into our arms. As I left the delivery room I had a few nurses congratulate me and remark on how easy I made birth look.

I am so incredibly thankful to have used Hypnobabies for my birthing time, and highly recommend it to anyone who is open to the idea of a easy, comfortable birth. I have to say that I was so euphoric after giving birth, not simply for meeting my sweet babe, but for having such a empowered and comfortable birthing experience. Thank you Hypnobabies!!!