“However, at a certain point I just felt the urge to just push him down, so I did, and suddenly felt his head right there! On the next wave I pushed his head out, and leaned back, took a breath, and pushed his body out. I grabbed him and pulled him up out of the water! He ended up being facedown!”

My guess date (Hypnobabies term for due date)  was July 9, but it came and went with no signs of anything. I was able to remain calm and patient knowing, as the Joyful Pregnancy Affirmations say, “my baby knows how and when to be born and I am patient.” 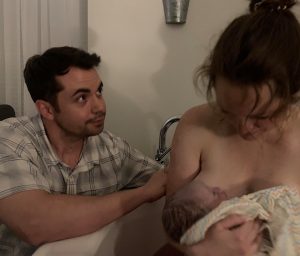 I went in for my 41-week checkup (Wednesday July 15) and for a fetal non-stress test and everything looked healthy. The tech even said, “oh you had a good wave there… did you feel it?” I didn’t really. Then, my midwife offered me a membrane sweep which I declined. It just didn’t feel necessary or right at that point, even being 41 weeks. She did recommend one for the following Monday though, which I felt ok saying Yes to, since that would be putting me closer to the 42-week mark, which is when I would be referred out to the hospital. She also ordered a biophysical profile for Saturday.

Starting on Friday night, July 17, I started having prodromal/early birthing waves (Hypnobabies term for contractions) about 8ish minutes apart that fizzled out to 10-12 minutes apart on Saturday morning. That day we went in for the biophysical ultrasound and everything came back normal! ♥️ I continued to have waves randomly on and off that day and was texting my midwives, who offered me to come in a day early, Sunday, for my sweep. I was also texting my doula. They all encouraged me to try and rest and hydrate and eat.

Saturday night I had more small waves, about 10ish min apart. Sunday morning at 11 I went in for my membrane sweep. They also offered me a castor oil shake, which I declined, since I didn’t want to deal with the side effects of that.

(Side note: I always felt so empowered and able to say “No Thank You” to things, even though my midwives never pressured me. I credit my Joyful Pregnancy Affirmations for that: “I can say No Thank You and still be respected”)

For the sweep, my midwife told me “Now I’m not very gentle with these because we are trying to get things going and I just want you to be ready.” So, I tried to “release” and “relax” my body while my awesome husband held my hand. The sweep ended up not being painful at all – just a little uncomfortable and mostly just pressure. When she was done, she asked if I wanted to know how far along I was. I had been pretty set on no checks up until that point because I know women don’t give birth by numbers, but I decided that since I had been having waves already, and that the outcome wouldn’t change my mental state or my approach to my birthing time, I was be ok with whatever she told me, so I said yes and found out I was 5 cm, 70% effaced, and -1 station!

I was stunned that I was already at 5 cm with how well I had been able to relax through my waves the two nights before and never felt like they were anything more than slightly uncomfortable. I also found out that he was ROA which means he was head down, but face up on my right side, but I refused to let that frustrate me.

I texted my doula, Madison Lopez (who was also our Hypnobabies instructor!) to tell her the results (she was very excited and encouraging), went home, and almost immediately after that, my waves started getting more consistent and about 7 min apart. I stayed at home working through them using “Release” (Hypnobabies cue to instantly enter hypnosis) and “Peace” (Hypnobabies cue for instant physical comfort) cues  and deep abdominal breathing (5sec in, 5sec out) telling myself I only had to do that 5-6 times before the wave would be over, since they seemed to last about a min long almost from the start.

By 4:30 pm I was ready for my doula to come over. She and my husband worked through them with me as they got more intense and closer together, mostly applying pressure to my shoulders during a wave while I said “Relax” (Hypnobabies cue to deepen hypnosis) and “Peace” to myself. We also used some counter pressure techniques like hip squeezes, and some rebozo techniques.

Since we knew he was ROA, (plus my back was hurting a bit which was consistent with him being ROA) she also suggested positions to help him move – abdominal lift and tucks mostly, as well as some forward Leaning Inversion inversions and side lying releases. These were all things my husband wouldn’t have necessarily known when and how to try, and I was getting to the point where I wasn’t wanting to communicate much between waves, so I wouldn’t have been able to tell him what to try, which is why having a doula is SO IMPORTANT.

It seemed to work because my back stopped hurting. Around 8:30 pm I moved to the toilet to encourage baby to move down. At around 9:30 pm I was feeling more pressure in my pelvis during waves and they were about 3 min apart, so she suggested we head to the birth center. The drive there wasn’t too bad!

We got there around 9:50 pm, and my midwife asked if I wanted to be checked – again I wasn’t sure it was necessary since I KNEW my body was doing what it was supposed to do but decided I would be ok. I found out I was 9 cm! She also said she could feel my bag of waters bulging. That was encouraging.

We kept working through waves in the bed with a peanut ball between my legs, and then backwards on the toilet to encourage him to move down some more. Around midnight I was feeling lots of pressure in my pelvis and decided it was time to head to the birth tub. As I was moving to the tub, I felt a very strong wave coming so I got on my hands and knees on the bed to work through it. Suddenly I threw up, and at the same time felt my water explode everywhere! I soaked my doula’s pants 😂 Thankfully she had an extra pair!

Later my doula told me that when that happened, she told me “You’re ok” to keep me calm and that I responded, “I know.” I don’t remember saying that but it’s such a testament to the mindset Hypnobabies had given me.

Anyway, after that I knew that Transformation (Hypnobabies term for transition) had begun!

I got into the tub and spent some waves leaning over the side. Eventually, I got on my heads and knees and started moving into pushing waves. I had pushing waves for about 50 minutes. I could feel my birth canal opening up and could somewhat feel him moving down, but not a ton. Nobody tried to coach me on pushing, they just encouraged me and I’m so thankful for that.

However, at a certain point I just felt the urge to just push him down, so I did, and suddenly felt his head right there! On the next wave I pushed his head out, and leaned back, took a breath, and pushed his body out. I grabbed him and pulled him up out of the water! He ended up being facedown!

I think my entire birth team was stunned because my midwife hadn’t even had her hands in the water. I think everybody thought I had another 30 min or so, which I probably could have if the urge to push him out hadn’t been so strong.

His Cord was wrapped once around his neck, but he cried and opened his eyes pretty much immediately! My midwife helped me untangle him and my husband and I learned he was a boy! We hadn’t found out the gender!

BOP: I did end up tearing “a decent second-degree tear” (my midwife’s words) because I pushed him down so fast but honestly, I didn’t even feel it in the moment and I don’t have any regrets. My birth happened how it was supposed to happen, and I can honestly say that I had an amazing pain-free birth from start to finish.

Even while I was getting stitched up, (while my husband held and bonded with our son, which was so special for them!) my doula put pressure on my shoulders and helped me use my Peace and Relax cue to work through the discomfort of that. Another reason to have a doula. My husband was free to be with our son while she helped me. 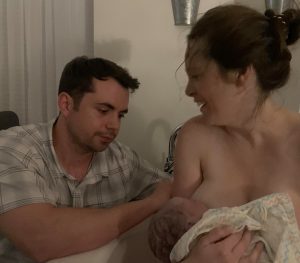 No, I didn’t manage to listen to my tracks every single day. I probably averaged about 4 per week, sometimes more. During maintenance I really only got to the longer tracks and not as much the All Techniques maintenance track. I probably would have benefited from listening to the Visualizing Your Birth track more to practice a more controlled pushing time, but again, I have no regrets about anything.

I did listen to some tracks during the active birthing time – mostly Deepening Your Hypnosis (Hypnobabies track for deepening the level of hypnosis). They were nice but I didn’t have them on continuously.

I mostly utilized the Peace and Relax cues and the deep breathing, and I think those 3 were the most instrumental in staying relaxed and in hypnosis.

Lastly, I encourage EVERYBODY to hire a hypno-doula… or at least just a normal doula if you can. She freed my husband up from the task of communicating with the birth center so he could just focus on me and gave him breaks to eat or get our stuff together or get the car ready. And like I said, she had the skills to suggest good positioning to get him to move head down and engage my pelvis. They are SO worth the money.

I am telling every pregnant person I know to do Hypnobabies!