Join our Hypnobabies Community and receive 10% off of all Hypnobabies products!
“I think the biggest thing, was that even though my “pressure waves” were close together, I didn’t feel that they were intense enough for me to be in active labor. Thank you Hypnobabies.” 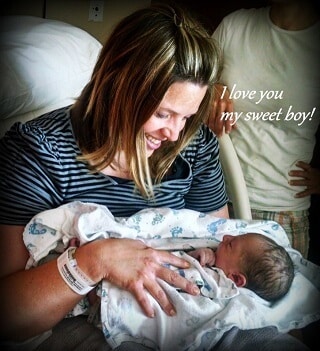 I arrived to pick up my kids from my friend’s house at about 1:45 pm. I chatted with some friends for a bit and then told them that I had some good, rhythmic tightening, so I thought that things might be starting. I decided that I would go home with my kids and let things happen and get more serious and then I hoped that we’d go to the hospital some time that night. So since I was getting more convinced that this was the big day, I wanted to leave my van “in town” (I live about 10 minutes outside town) so that whoever babysat my kids that night, would have a car and car seats to drive around in. So I called my husband at 2:30 pm, to see what we should do about the car situation. We decided that he would take a break from work to run us home in his car really quick, so that the van could stay in town.

Then things started to get a little stronger. I would lean over my friend’s table and go quiet for a minute during my small pressure waves. I started to get excited that things were getting so strong already. Maybe it would be a 15 hour birth instead of a 24 hour birth. My husband then sent a text at 2:47pm, and asked if he had a few minutes before coming over to take us home. I started to change my mind about going home first. I saw on my timer that pressure waves were coming at about 2 1/2 to 4 minutes apart. So I told him that maybe he should just go home and get ready, and that we should then head closer in to where the hospital is. Not to necessarily to check in, but to be near to it, since we live about 50 minutes away. I called my doula and midwife at 2:50 pm to let them know that I was going to head that direction. I texted my sister in laws at 3:08 that I thought today was “Baby Day.” The original plan was for me to head to the hospital, get things checked out, and then invite my sister in laws who could, to come and hang out with me. The rest would be filled in on all the details and updates as they came. Funny plan.

That’s when things got intense. I decided that if ths was the day, I needed to start listening to my Hypnobabies tracks. I pulled out my phone so that I could listen with my headphones. I also realized that it felt better to hum through my pressure waves. For some reason (I’ll have to ask how it all happened, my husband stopped by. I told him he didn’t have time to shower, but to hurry and go home and get all his stuff. All the while, I’m just hanging out at my friends house.
Read Natalie’s entire birth story HERE.