“Once I’m the floor I started feeling pushy immediately and just went with it. I blocked out that I was only 7.5 cm and focused on whether I was feeling pressure, which I was, so I let that guide me. I began pushing and after about 10 minutes of pushing our baby boy was born at 11:33 p.m.!” 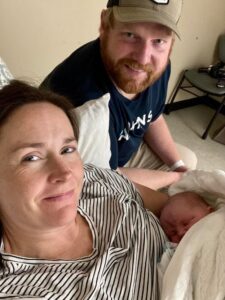 This was my third baby, second Hypno-baby, and I planned a birth center birth and had a great, low risk pregnancy like my others. At 37 weeks however I had one high BP reading and an abnormal lab and an immediate induction was recommended. After calling my old midwives and discussing the recommendation with my current midwives, their supervising OB and my old midwives, we decided to go forward with the induction the next day on 11/30/21. As I was 2 cm with a favorable cervix, we began with a Foley bulb which easily dilated me to 5-6 within 2.5 hours then started a very low dose of Pitocin, which never got waves (Hypnobabies term for contractions) going, and after 8 hours of dilation with no waves the midwives recommended, I go home since my updated labs were normal. I gladly accepted and went home!

The next 2 weeks were great; BP was never abnormal again, labs were normal, and I transferred care to my old midwives within a local hospital, which felt like being back home. I also pulled way back at work which was great for my mental health. I could tell my body was working to get ready for baby, as about a week later I began with intermittent nausea and stomach uneasiness, cramping and hormonal changes, but baby simply wasn’t ready. I also was able to kick a cold I had, and I was grateful for an unusually fast recovery from that. At 38+4, I began pumping once a day and walking 2 miles a day in addition to my daily dates I started 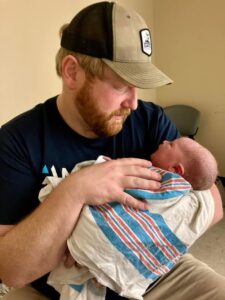 On 12/13/21 (39 + 4) I noticed baby was squirmier than usual and seemed to be trying to change positions. Around 9 pm I laid down and listened to Come Out Baby (Hypnobabies track to encourage baby to be born), which I really liked because it incorporated some of the fear clearing techniques, and baby got even more active. Suddenly, I felt an aggressive pop at 9:45 p.m., baby immediately stopped moving and I knew that had to be my water. I didn’t leak, though, so I finished the track before getting up and going to the bathroom where I confirmed the break. I let my husband know and told him not to do anything or tell anyone until we had to, and I went to take a bath. About 20 minutes after the break though I realized the bath wasn’t going to happen as my cramping was picking up, so I decided to get my 2 older kids packed to go to their grandma’s instead.

As we were packing, I could tell the cramps were getting closer, but they were not uncomfortable and remained in my lower abdomen throughout. Soon after I started preferring to squat through them, however, and realized that when I started squatting for my previous birth, we were 1.5 hours away from having her. I told my husband to get the kids to his moms and don’t dilly dally, and he took off. By the time he got back (about an hour from water breaking) I was ready to go, and I turned on Deepening Your Hypnosis (Hypnobabies track to deepen the level of hypnosis) as we pulled out of the drive. 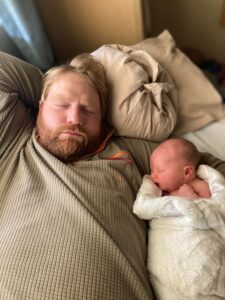 I had 3 waves on the way to the hospital, which was 2 more than with my daughter, so I knew we would have her quickly upon arrival. When we checked in, I requested to do admit in a L&D room since I figured we had less than an hour, and learned THEY HAD NO AVAILABLE ROOMS . The whole point in going early was to get comfortable since with my daughter I literally jumped in the tub and had her, and now I was facing birthing in triage! The on-call midwife was actually an old employee of the birth center though, and she offered to call the birth center so I could go there, but I declined and decided to grin and bear it, even though it sounded dreadful.

In triage, I immediately went into the SHARED () bathroom and got on hands and knees. The nurse tried to talk me out of it, but I knew it was best for me. After about 3 waves I went back into my triage room and agreed to a check and was found to be 7.5 cm, which meant I was super close to my baby. Waves were about 1-2 minutes apart, still only in my lower belly like cramps, and I started planning how to push baby out. I realized the bed wasn’t big enough to get on hands and knees so when the midwife offered to throw a pile of blankets on the floor I quickly agreed. Once I’m the floor I started feeling pushy immediately and just went with it. I blocked out that I was only 7.5 cm and focused on whether I was feeling pressure, which I was, so I let that guide me. I began pushing and after about 10 minutes of pushing our baby boy was born at 11:33 p.m.! Deepening was still playing as I took my headphones off . At 8’12 he is my smallest baby by a whole pound and the pushing took hard work but once I got his head into the birth canal the rest of him easily followed. 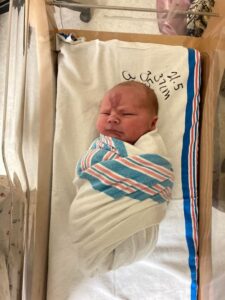 My goals for this birth were a 2-hour birth (based on my feeling like my previous 4-hour birth was too long haha) and not experiencing loss of control or panic in transformation (Hypnobabies term for transition) and both were accomplished. I never felt transformation, only extremely mild nausea, I was very hot and thirsty. But the only sign I had that it was time was the urge to push.

Like my previous birth, the visualization worked SO well for this birth, as it was just a little under the time, I focused on it being. Overall, it was a very comfortable birth and I never asked for help or felt panicked. Which is a complete turnaround from how I felt after my induction 2 weeks ago. I have been reciting the line from Shifting the Paradigm about reclaiming my right to birth as destiny compels me to (from an article in the Hypnobabies materials), however, and used that as my mantra. I also had a feeling this birth would start with water breaking and have been reciting “my water bag is strong” to prevent that, but oh well haha. He came soon enough after.

Thank you SO much to this program, I don’t know what magic y’all have in these tracks, but it works. I’ll continue to share with everyone I know!