“I gave a couple of pushes and reached down to feel his head, then gave one more push and caught him as he shot out. I said to my husband “I just had the baby.”

Hypnobabies Childbirth Hypnosis really does help you enjoy a much easier and more comfortable birthing! Use code MOMS25 for 25% off our Hypnobabies Home Study Courses.

Last Saturday I began having mild waves (Hypnobabies word for contractions) around 9:30/10 pm. I had experienced them the previous weekend as well, but after about 4 hours they just fizzled out. So, I figured this time it was just more practice waves. I told my husband nothing was going to happen that night but he (fortunately) insisted on packing our bag and getting everything ready anyway. Later he fell asleep on the couch and I noticed my waves were a bit stronger so I laid down in bed and started my tracks. 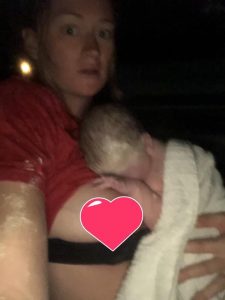 I found myself getting annoyed halfway through each track and kept either switching to a different track or shutting them off and trying to sleep. At this point, my waves were a little more uncomfortable and I couldn’t sleep through them, but I still thought maybe they were just practice waves and told myself I still had a day or 2 before they really picked up. Around 2 am my daughter woke up and was hungry. I went to the kitchen to get her a snack and suddenly the waves were more intense and I had to stop in my tracks and wait for them to pass. I yelled for my husband to go help our daughter. Then I told him to go back to sleep because we still had plenty of time.

He didn’t go back to sleep but hung out on the couch watching tv. I tried to listen to some more tracks but kept getting frustrated with them and eventually decided I’d get in the tub for a bit. It was now around 4:45. My husband came in to check on me and I asked him to time my waves. They were about a minute long and anywhere from 4-8 minutes apart, and they were very strong and intense. The water felt great but it immediately intensified my waves even more and after about 10 minutes I had to get out to go to the bathroom. I noticed when I got out of the tub my body was shaking. I thought maybe this was transformation (Hypnobabies word for transition) beginning (it was) or maybe I’m just cold or nervous.

Once I was out of the tub my husband finally demanded that we call the birth center and have my mom come over to stay with our daughter. We rushed to get the last of our things loaded up in the car and left for our hour-long drive to the birth center. The only way I was able to get through my waves at home was on my hands and knees. Fortunately, our SUV has a very roomy back seat so I was able to continue staying in this position as my husband drove. I was making a lot of loud, wild animal-like noises through each wave and had one of my tracks playing so my husband just kept quiet for the most part and kept on driving.

About 15-20 minutes into our drive I realized we weren’t going to make it to the birth center. I didn’t say anything to my husband because I knew he would panic. So, I stayed in my own little world and worked through each wave as I felt them starting to carry the baby down my body. Then I felt the need to push. I gave a couple of pushes and reached down to feel his head, then gave one more push and caught him as he shot out. I said to my husband “I just had the baby.” He immediately panicked and said he was going to pull over and call 911. I told him not to and called the birth center instead. They said to keep driving and come in. 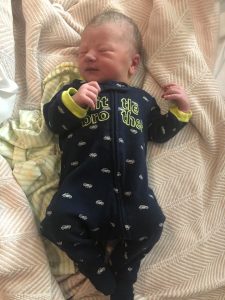 At this point, we were only 20 minutes away. We got there and brought baby inside and he looked perfect. The whole thing was very surreal and I felt like I was in shock a little. I had done so much to prepare and help get through my birthing time (Hypnobabies word for labor). I had my Hypnobabies, yoga ball, essential oil, tens unit, counter pressure moves. But during my birthing time ended up not using much of anything. At the time I was really disappointed because I thought Hypnobabies failed me. I was in a lot of discomfort at the end and thought I wouldn’t make it through it. But looking back I know Hypnobabies helped me remain calm and centered, even if I didn’t feel my hypno-anesthesia. I’m so happy with how my birthing day ended up, and I now have quite the story to tell people.