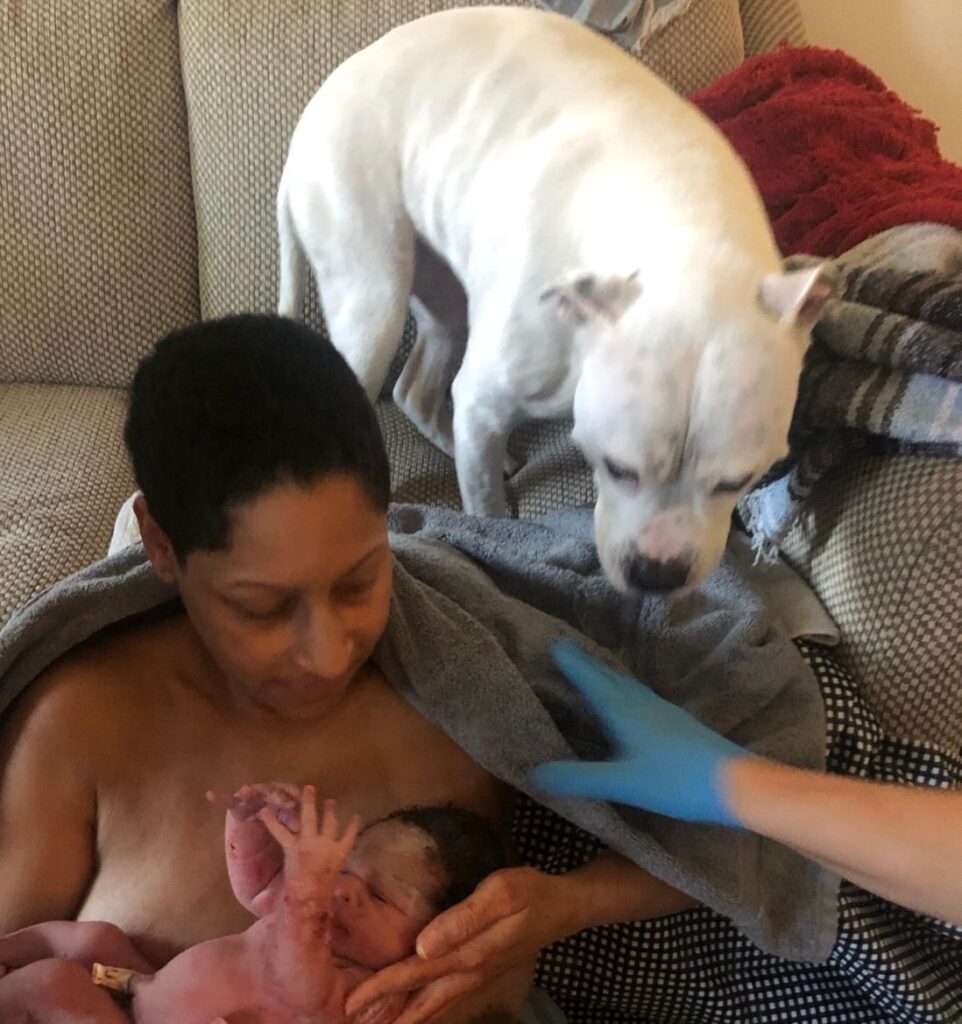 “It was the best experience ever and I know I owe my success to Hypnobabies for keeping me in a positive mindset with Joyful Pregnancy Affirmations, Fear Clearing, Birthing Day Affirmations, Easy First Stage tracks, etc. I am truly convinced that birthing is way more mental than physical.” 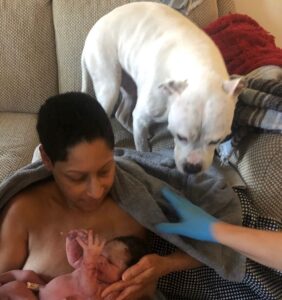 It all happened super-fast. I hadn’t experienced any Braxton Hicks or waves (Hypnobabies term for contractions) the night before. At 12:18am, I woke up to use the bathroom per usual, but I couldn’t hold it. I felt like I urinated on myself a little. I went to the bathroom, changed my underclothes, and urinated on myself again just as I was getting in bed! Ok, clearly something was off, so I texted my midwife and told her that either I peed on myself, or my water broke. After I told her it wasn’t a constant stream, she had me go into my birth box, get the amnicator, and insert it into my vagina to test if it was my membranes being ruptured. It was! But just a slow leak. Since I was GBS+, we knew we had 18 hours to make this happen before a hospital transfer would be necessary. However, I decided to wait until the morning (planned for 6am) before using anything like castor oil to get things going.

My midwife then told me to get some rest and that she would check-in in the morning. I called my partner, told him to pick up some castor oil and to make his way on over. After searching multiple stores, he brought 3 bottles of castor oil lol…clearly, he was nervous! I got back in bed, put on my Fear clearing Hypnobabies track (Hypnobabies track to release fear) and tried to relax. However, I really couldn’t relax. I was so anxious, and luckily, waves started around 2am anyway. They were probably 20 minutes apart. I was able to deep breathe through them, but I did have my twin sister meet me in the living room around 3:30am to support me.

Throughout the birthing time (Hypnobabies term for labor), she fed me sweet potatoes, salmon, peanuts, apples, cheese and had me drinking water, Boost and Gatorade. She just kept offering me food to keep my energy up. My twin took the Hypnobabies class with us, so she was great for keeping the hypnosis track going throughout the Birthing Time. I laid on the couch with the peanut ball between my legs, and just slowly, calmly, took deep breaths through the waves as they came. They quickly moved to being about 6 minutes apart, and she could tell when they were happening because I would breathe deeply. Around 5am, she asked me if I wanted her to rub my back during waves. Genius! The counter pressure was heavenly. The waves were maybe a few minutes apart during that time. Around 7am, I figured we should wake up my partner.

I originally thought it was going to be a long day, so I wanted him to rest. As the waves started to get closer, I thought it would be good to have him help with the counter pressure. When he came into the living room, in his robe, he said, “it seems like those waves are pretty close together!” That’s when my twin told him, yea, they are about 47 seconds apart. And then I told him, “hey, you wanna go put some clothes on?” Lol By then I started vocalizing through the waves and I needed both of them to apply counter pressure. I would shout “wave wave wave!” when one was coming, so they could massage. I had to shout because they were running around trying to get the birthing pool together – spoiler alert, the planned water birth definitely didn’t happen. My dog also started to lick my face because he could tell I needed some love 🙂 Also, when my partner saw how close the pressure waves were, he asked if the doula and midwife were informed. They were, but they thought we had a long time to go.

Around 7:30am, I started making pushing sounds, but I guess they didn’t hear them over the phone. I then told my midwife that I was laying down using the peanut ball and asked if that was the most efficient. She told me that it might be better if I used gravity and that the waves were likely more uncomfortable laying down. I tried the birthing ball, but that hurt like I was preventing the baby from coming down. So, then I tried hands and knees leaning over the couch, and that felt good. We still had the Hypnobabies hypnosis tracks like Birthing Day Affirmations and Easy First Stage (Hypnobabies main birthing time track) going. I wasn’t in pain, just uncomfortable. At one point I jokingly (but seriously) yelled at my partner “AJ stop tryna cop a feel! Massage my back not my butt!” Lol!

The midwife arrived around 8:10am and checked the baby’s vital signs – baby was fine. My midwife asked me if I wanted to be vaginally checked, and I said no. She then had me do 4 waves on the toilet, and that’s when she said that she could see the head! She asked me if I wanted to birth right there in the bathroom or go back to the living room. We moved back to the living room because I didn’t want to give birth in the bathroom. I kept having pushing urges that I breathed through. Everyone coached me to continue deep breathing – using horse lips helped too. It started to burn, and that’s when my midwife calmly said it’s because baby is coming. That was the only really uncomfortable part, everything else was just discomfort – made 10 times better by the massages! One of the 4 pushes got her head mainly out. The midwife kept telling me to push again for the rest of the body, but I didn’t feel the urge to push and Hypnobabies teaches mother-directed pushing, so I waited until the next urge to push. I gave it all I had, and she came out at 8:41am! 7.1lbs and 19 inches. My partner caught her, which was a shock to him, but he loved it.

The doula missed the birth since it all happened faster than she thought it would. It seems like the waves went from every 20-30 minutes to every minute muchhhhhhh faster than I could have imagined. I actually thought it was a stomachache because the stories I’ve read made me think that I would have space in between pressure waves, but turns out, my birthing time was just super-fast. It was the best experience ever and I know I owe my success to Hypnobabies for keeping me in a positive mindset with Joyful Pregnancy Affirmations, Fear Clearing, Birthing Day Affirmations, Easy First Stage tracks, etc. I am truly convinced that birthing is way more mental than physical. Good luck to everyone!