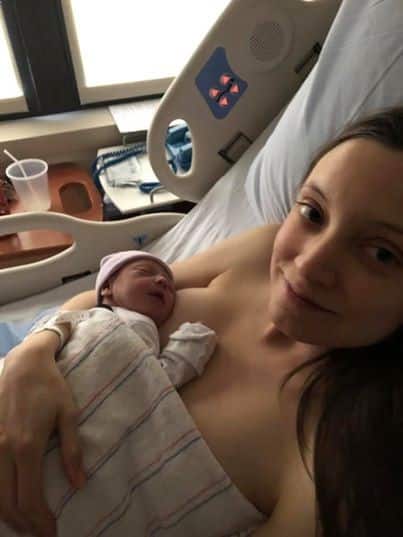 “It was a really incredible experience. I was in shock and amazed at what I had done, and soo happy to have my healthy baby who was pink and began crying.”

During my pregnancy, Hypnobabies made the experience far more enjoyable. Listening to the tracks really lowered my stress levels and took away the fear I had been feeling about the birth which was my first. I had been having lots of round ligament discomfort and I seemed to notice it less after starting the tracks. I felt confident that I would have a positive birth experience, which I did. 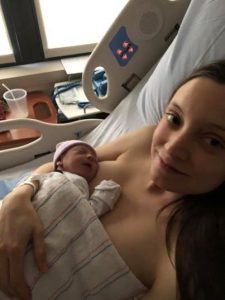 Calder Rhys was born on Feb. 24th, at 36 weeks. Waves (Hypnobabies term for contractions) manifested as back discomfort the day prior, but I did not realize or even suspect that they were birthing waves until late that night. We spent that first night in the hospital with little to no change. I listened to Deepening Your Hypnosis (Hypnobabies track for deepening the level of hypnosis), Birthing Day Affirmations tracks the whole night. In the morning they sent me home with the diagnoses of prodromal waves. I was told to go home and get some sleep. I was very distraught at this as I felt far too much discomfort to sleep. Before we left the hospital, I noticed that I could not pee. I told a nurse, but she said difficulty peeing was normal and they sent me on my way home

.At this point, I thought I was having prodromal waves, so I stopped listening to the tracks unfortunately. Once we got home, things continued to progress. As strong as the waves were, I felt unsure about it being my actual birthing time (Hypnobabies word for labor). I took some Tylenol PM as instructed and listened to Birthing Day Affirmations while in the bath. I was told this should have calmed things down, but it didn’t. I called the midwives and was told that I “didn’t sound like I was in” my birthing time and that I sounded fine. After 6 more hours of this, and still not being able to pee I decided we had to go back to the hospital because my bladder was extremely full and very uncomfortable by that point. It was almost as uncomfortable as the waves themselves. I could visually see that my bladder was distended.

Listened to tracks on the way to the hospital again. Once we got there, they had to catheter me which was uncomfortable but honestly nothing compared to what I was already feeling. It was a very welcome relief. Our midwife said this complication can sometimes happen when the baby’s head is a certain way although it’s not at all common. She said she’s only seen it a handful of times after decades of experience- but it actually happened to her at her first birth! My midwife checked me (and the midwife on call was the one I knew the best, yay!) and I was 6 cm and fully effaced. She said we’re for sure having a baby today! Until then, I still doubted that I was in my birthing time.

After my bladder was empty, the birthing waves themselves were far more doable. I felt totally normal in between waves and was able to talk and make jokes. My doula was on her way, we moved into a large birthing suite with a beautiful view of the city and the birthing tub was filled for me. I took each wave as they came, they were intense but once it was over, I felt fine. The midwife, my doula and the nurse present all said I was a very quiet birther. They said I was doing great and I felt that I could handle it. I wasn’t listening to tracks at this time, as there was so much confusion in the beginning, and I felt I was coping well without them. At one point in the tub, things got quieter. We were listening to relaxing music and I actually felt so peaceful and wonderful between waves. 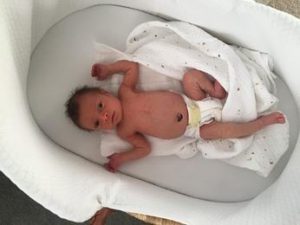 And then my water broke, while in the tub. Things got more intense, and I started to feel a downward pressure on my back and tailbone. I never felt the urge to push- if anything everything in my body was like “no don’t push!!” And this caused me a lot of discomfort. After a short while of this, I actually started asking for an epidural. My doula knew I wanted an unmedicated birth, so she told me that it meant I was very close. She said all her natural mama’s ask for an epidural when they get close, and that the feeling would pass. And then I begged them for it. I really really begged. They agreed to check me one more time and if I wasn’t close, they would get it for me

.The midwife checked me and then told me to reach down and feel his head. He was already coming down on his own, without my pushing, which is why it was so intense for me. At that moment I knew I could do it and didn’t need the epidural. She then directed me to push, and I found the discomfort went away when I was pushing. It gave me something to focus on instead, and I felt much better although it was replaced with a different kind of intensity. I had to be catheterized one more time, as my full bladder was keeping him from coming down further. We moved to a birthing stool. 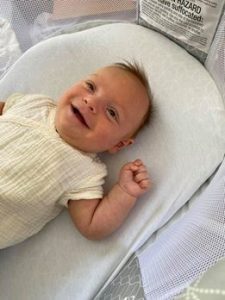 After about 45 minutes of this intense, slow stretching my midwife told me to reach down and pull him out. I did so without hesitation. I honestly had no plans to do this. I was just so surrendered and easily suggestible (probably from all the hypnosis) that I was going to do whatever she told me to do. So, after his head and shoulder was out, I pulled him out the rest of the way myself! It was a really incredible experience. I was in shock and amazed at what I had done, and soo happy to have my healthy baby who was pink and began crying. We did skin to skin and I didn’t need any stitches. I was able to get up to pee normally right after birthing the placenta.

He was 5lbs and 14oz. We had some breastfeeding difficulties in the beginning due to his small size and it was causing me a lot of stress. I also had low supply. Around the same time, things started to get serious with the Covid virus so we were isolated, and I couldn’t see another lactation consultant in person. I started listening to the hypnosis tracks for breastfeeding (Breastfeeding Success) and things really started to improve from there. Now almost 3 months later, he is eating so well that he is over 15 lbs.!

Anyway, even though I didn’t get to finish the course (I had one class left) and use the tracks as suggested I think they still made a huge difference in my pregnancy, birth and breastfeeding journey. I would highly recommend it to anyone hoping to have a natural, unmedicated and empowered birth. Wishing you all the best. You can do it 🙂