“Our main nurse said she was really impressed and asked all about Hypnobabies and the tracks I had listened to. While this was a more adverse birthing time than my first, I feel happy that we were at the hospital long enough to administer the antibiotics needed for GBS, and that I trusted my body to allow my baby to come out without the use of too many interventions.”

We welcomed Juliet Clementine on September 21st at 3:18 am, our second hypno-baby.

Our first was born in October of 2018 at 39+6 – I felt my birthing time (Hypnobabies term for labor) begin around 11 pm and turned on my tracks, slept, and woke my husband up around 5 am to go to the hospital. When we arrived at 6 am, I was 9 cm and fully effaced. Fiona Lisette arrived after 20 minutes of pushing at 8:45 am. It was a perfect, calm birthing time. 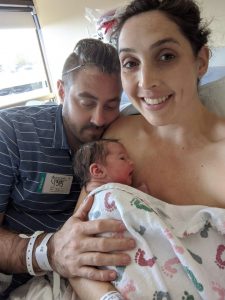 I expected our second baby to arrive right around her guess date (Hypnobabies term for due date) simply because our first had. However, I battled some fear around COVID that the baby would arrive early. I battled more complications this time including a low-lying placenta that resolved, much more severe nausea and vomiting, anemia, and GBS+ diagnosis. When we made it to 40 weeks, the baby did not seem to be that close despite several days from 37 weeks on with some light cramping. I decided to have my membranes swept at 40+2 since my husband has limited time off with the hope that baby would arrive in the next few days. I also scheduled an induction at 41 weeks but was very sad that my seemingly perfect birthing time would not be repeated with this baby. I listened to my Affirmations and Come Out Baby (Hypnobabies track to encourage baby to be born) tracks and reframed the induction as best as I could. I also spoke with friends who has been induced and read on Evidenced Based Birth about the pros of a 41-week induction.

I thought things had progressed after my membrane sweep due to discomfort, discharge, and bloody show during the five days after. But, when we arrived at the hospital and I was checked at 2:30 on September 20th, I was still 2 cm and 50% effaced. I had visited a doula/chiropractor the day before, and she told me the baby was ROA, something I had suspected and had been trying to address with Spinning babies. I knew at that point that baby was probably not moving due to position and this might be a more uncomfortable birthing time than my first. We started misoprostol at 2:45 and I began to feel intermittent and light pressure waves (Hypnobabies term for contractions). My husband and i turned on some shows and hung out since these waves felt pretty light and I wanted to save the tracks for a more intense time. At 6:45 I was given a second dose of misoprostol.

We ate dinner and took a nap until 11:00 or so when the next doctor came on. She performed another exam and I was 5 cm, so beyond the use of a bulb. At this point, I felt my birthing time was beginning and wanted to see where nature took us without other interventions. I felt as though the doctor was pushing the use of Pitocin which I very much wanted to avoid if possible. I told her we would prefer to wait at least a half hour to see how my waves progressed. As soon as the doctor left, the nurse complimented us on our preference to stay on our own path and reminded us that we never need to agree to a medication we don’t want to use. This was around 11:30 pm and a few minutes later, the pressure waves became intense and were only a few minutes apart. 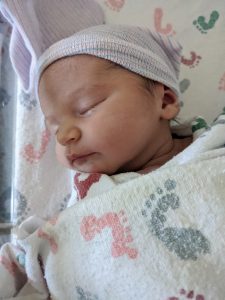 I bounced on the ball and augmented the bed so I could lean over and listen to tracks. However, the waves became so intense that I felt a bit confused. I saw on the monitor that they were only two minutes apart and appeared to be coupling waves. These lasted a few hours during which time I tried to use the Peace cue (Hypnobabies cue for instant physical comfort) and the birthing day tracks like Easy First Stage (Hypnobabies main birthing time track). I was very uncomfortable but each time the nurse came in, she would seem amazed that I was so calm. Around 2:30 am I felt so uncomfortable that I asked for fentanyl so I could have a short break since I wanted to avoid an epidural and did not want to know how far along I was with a cervical exam. The dose was administered a few minutes later and I was able to shut my eyes for five minutes for a bit of a respite. At that point, I began to feel rectal pressure and understood that baby was coming very soon.

The doctor came in at 3:05 am to check and confirmed I was ready. Baby was born sunny side up in her bag of water after three waves at 3:18 am. I was so exhausted, but so thankful that I had the education and understanding to say no to Pitocin when I felt my body would probably take over from the misoprostol. The coupled waves were far more intense than those I had experienced with my first birthing time, but I feel proud of my body and glad that I was able to let my body guide. Our main nurse said she was really impressed and asked all about Hypnobabies and the tracks I had listened to. While this was a more adverse birthing time than my first, I feel happy that we were at the hospital long enough to administer the antibiotics needed for GBS, and that I trusted my body to allow my baby to come out without the use of too many interventions. Welcome Juliet Clementine!