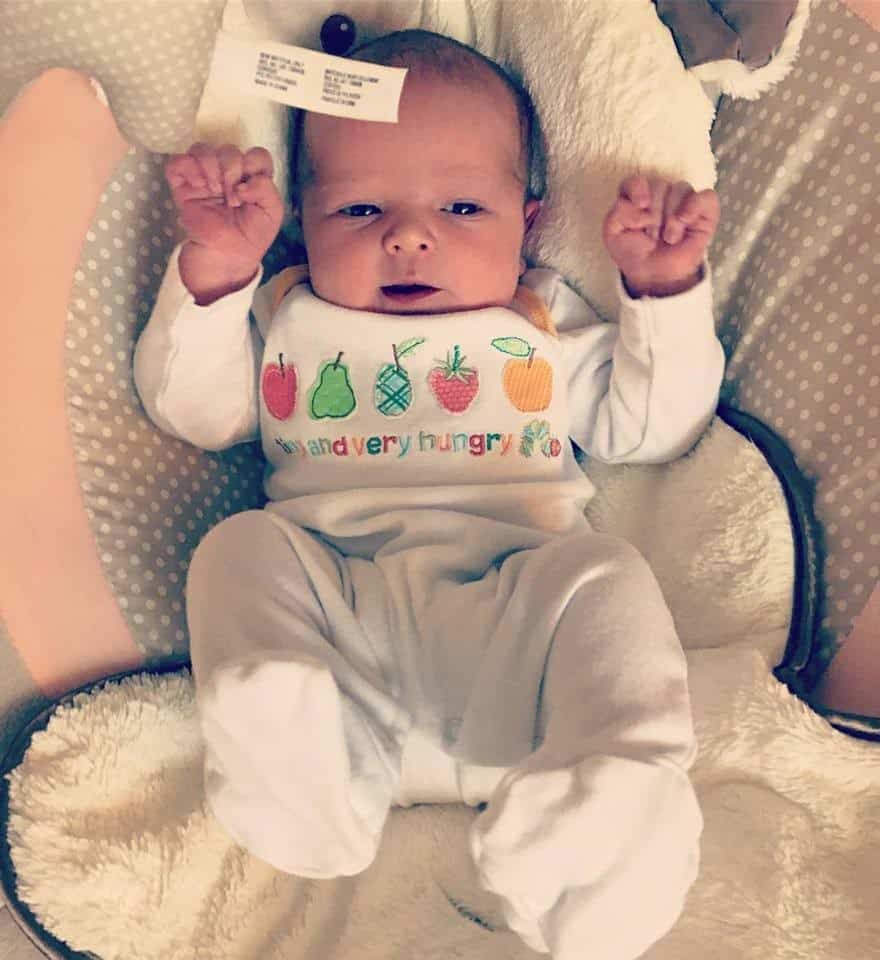 “When I got into the bathroom, however, I felt the urge to push through one of my pressure waves (Hypnobabies word for contraction), and when I did I put my hand down there and felt a bulge. I yelled something like, “umm, is that a head?!?!” and after checking me the nurses helped me to the bed as there was no time to get in the tub. I got on the bed on all fours, pushed three or four times, and baby was out!”

Baby’s guess date (Hypnobabies word for due date) was Aug. 13, but before I knew it, I was heading to my OB for my 41-week appointment and discussing options for induction. I was fine going to 42 weeks (the birth center cut-off) but decided to schedule an induction for 41+5 since that was we’d have guaranteed childcare for our daughter while we were in the hospital. 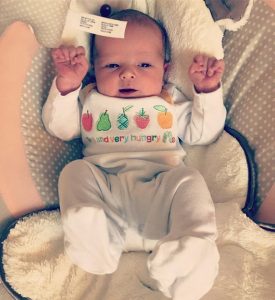 I started having pressure waves (Hypnobabies word for contraction) on Thursday, Aug. 23 (41+3), but they weren’t strong even though they were consistently 7-10 minutes apart. The OB said it could mean the beginning of my birthing time (Hypnobabies word for labor), or it could mean nothing. The pressure waves continued all day, sticking at 7 minutes apart. When one started, I would close my eyes and breathe deeply, visualizing my cervix opening and using my “Peace” cue (Hypnobabies tool for instant physical comfort). I only felt manageable discomfort with them the entire day.

That evening I noticed that the pressure waves were getting stronger. I continued to breathe through them and was still comfortable. We put our daughter to bed, and around 9 p.m. we asked my MIL to come up. She arrived an hour later; I was in bed, listening to my birthing day tracks and trying to relax. The pressure waves, however, were getting stronger and closer together and I found that I was uncomfortable lying in bed, so I got up and started walking around the bedroom.

Around 11 p.m., my water broke during a wave. I decided that the pressure waves were strong enough that I would be fine checking into the hospital even if I wasn’t very far along, so we got the car packed and headed off. On the drive to the hospital (about 25 minutes) my pressure waves were so close together that they were practically nonstop. By this point my husband was getting a little nervous that we might be having a baby in the car. I, on the other hand, was terrified that I’d only be 5 centimeters upon check-in and was ready to ask for an epidural since the pressure waves were coming one after another and not giving me a break. 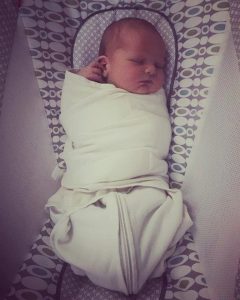 We got to the hospital and parked the car, then got the elevator down to the street. The entrance to the women’s center is about a two-minute walk from the parking garage, but I had to keep stopping to breathe through my intense pressure waves. At one point a car pulled up with two nurses heading home after their shift and they offered to drive us to the entrance. When we pulled up, one of them jumped out and went inside to get me a wheelchair. We headed into the reception area and checked in, then we were wheeled up to triage.

I was still having intense pressure waves one after another when we got to triage so they had to wait to check my cervix. Once they checked it they said I was 8 centimeters and my response was “thank GOD!” I really didn’t want to go the epidural route (I had one during my daughter’s birth and I didn’t like how it made me feel) so I was glad it wasn’t an option (and that I was clearly in transformation (Hypnobabies word for transition) and almost ready to have this baby).

The nurses then wheeled me from triage into our room in the birth center (I heard one of them say that I was more like a 9 than an 8). The pool was almost full, so I immediately went into the bathroom with the intention of getting in. When I got into the bathroom, however, I felt the urge to push through one of my pressure waves, and when I did I put my hand down there and felt a bulge. I yelled something like, “umm, is that a head?!?!” and after checking me the nurses helped me to the bed as there was no time to get in the tub. 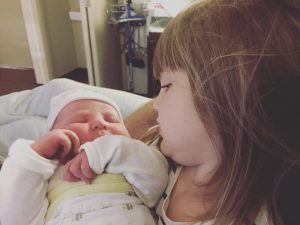 I got on the bed on all fours, pushed three or four times, and baby was out! I couldn’t believe it — I had pushed for three hours with my daughter and eventually had to have a forceps delivery as she wasn’t coming out on her own. This time, baby was born 19 minutes after I checked into the hospital. He was much calmer when he was first born than my daughter was, and I was able to hold him skin-to-skin and enjoy him right away.

I had to have a couple of stitches but nothing major. The hardest part of the entire birth for me was when I had to birth the placenta. The doctor was pressing on my belly pretty hard and asking me to push and it was much more intense than I expected! With the placenta, I was pushing for a good 15 minutes to get it out, compared with probably 3-5 minutes to get the baby out.

I wasn’t the best Hypnobabies student and I didn’t really get to use the birthing day tracks since everything went so quickly, but I definitely think that the course and the tracks helped prepare my mind to relax during pressure waves, whereas with my first birth I felt like I was fighting them. I can honestly say that I didn’t experience pain with this birth; I wasn’t necessarily in hypnosis, but the “Peace” cue and the deep breathing helped me to remain comfortable and relaxed and gave me the healing birth that I needed.