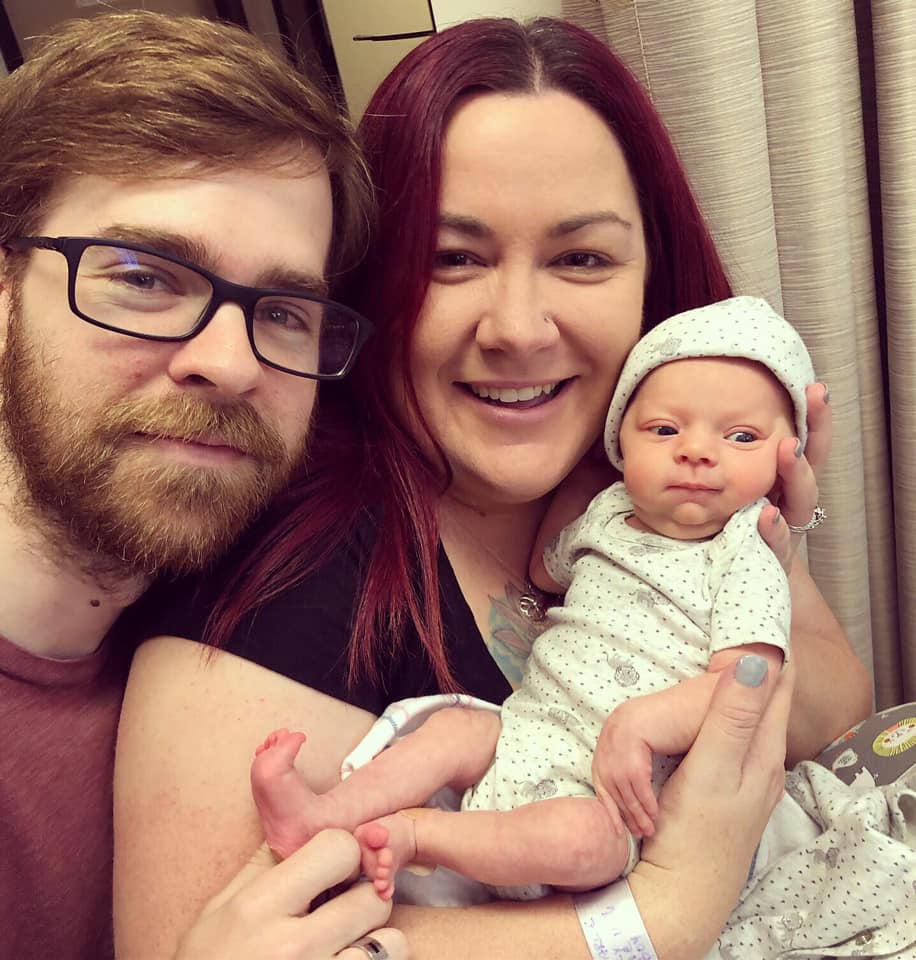 “As my waves began to build I found myself falling asleep in between each wave…this went on for several hours and I felt that I was able to stay on top of the pressure. My husband was an amazing support and would hold my hand, strangely every time I was holding his hand the waves felt more manageable.”

It has taken me quite a while to decide whether to write this or not because my birth was absolutely nothing like I had imagined or planned, but then I thought, you know what? I took my Hypnobabies classes, I listened to the my tracks, and I had my hopes and dreams for a natural and peaceful birthing. So, I’m going to tell my story. 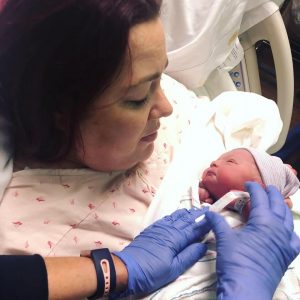 My original guess date was July 10th, I had planned to stop working on the 28th of June to relax and prepare for my baby’s birth! On June 10th I got off work at about 6:30 pm, I was hanging out with my husband and my dog and going over items I needed to pack in my hospital bag so I was prepared, I had finished my Hypnobabies course 2 weeks prior and I was just getting in the swing of maintenance hypnosis tracks although I wasn’t perfect, but I kept thinking, well there is always tomorrow, right?!

Wrong. I decided I was a little stiff so I went to take a quick bath, after the bath I came out to the kitchen to get a bedtime snack and felt a little gush come out of me. I looked at my husband and said, “do you think it could be bathwater?” There was no way my water was breaking. I had 4 more weeks, my bags weren’t packed, new moms always birth late, I had 4 more weeks! I started to panic, more little dribbles of liquid kept coming out, I called the hospital and they told me I should go to L&D for triage.

I was hysterical, I kept repeating “I don’t want to go, I don’t want to go!” But alas, for the safety of myself and my baby we packed up what we could and headed to the hospital at about 11 pm. I was the only patient coming in all of L&D and they were waiting for me. I did not take long to confirm that indeed, my water had broken. I was 35+6 weeks along; I was having regular waves (that I could not feel) (Hypnobabies word for contraction) and the staff felt that it would be best to induce. All of this information came at me in about a 45 min time span, all of which I was not in hypnosis, but quite the opposite: panic and fear. 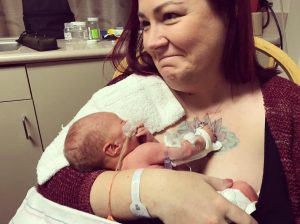 Once I had come to terms with the fact that I would be birthing my baby now, and not later, I began to go back into myself and search for those skills I had learned in Hypnobabies. The first thing I thought to myself was, Relax (a hypnosis cue for more comfort and calm), and suddenly my body began to relax. It was my mantra. I remember learning how fear and being tense could  work against me during my birthing time. Once I was settled into the bed and had the Pitocin hooked up my husband went to grab my computer and my tracks. I tried my best to get as comfortable as possible and get myself into hypnosis.

As my waves began to build I found myself falling asleep in between each wave…this went on for several hours and I felt that I was able to stay on top of the pressure. My husband was an amazing support and would hold my hand, strangely every time I was holding his hand the waves felt more manageable. I was checked several times and about 7 am in the morning I was at 6cm and the waves were beginning to increase, the anesthesiologist came in and asked if I would be wanting an epidural as she would be in a c-section for 2 hours. I declined and continued my routine of hypnosis tracks, sleeping, and holding my husband’s hand. 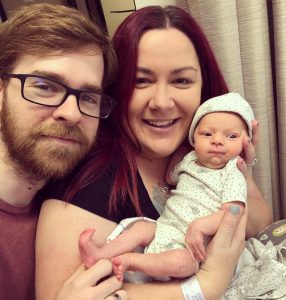 By 9 am the waves began to increase to a point that I was not able to stay on top of them, I was speaking with the nurse and she said that I was doing amazing, she said that she’s never seen someone so calm during birthing time (Hypnobabies word for labor) before, however, she said to me that I would need my energy when it came time to push. As the waves increased I began speaking to my husband and I told him I felt I might not have the energy to push if the waves increased. The nurse came to check my progress and she said I was at 7cm and I began to feel the urge to push, I was beginning to panic and it took me a few minutes to get myself back under control but I had made my decision that I wanted an epidural so that I could get some rest, as I’d not really slept and had worked the previous day.

At 9:30 am at 7cm I got the epidural and was given the peanut ball and I stayed there for about an hour and a half. My best friend and fellow hypno-mom came to give me support which filled my heart. After about 2 hours of resting following the epidural I was at 10cm and was fully effaced! It was time to push! For whatever reason, I was still able to feel the pressure during each wave and was able to use mother directed pushing during my birth. I would feel a wave and the Dr. would wait for me to say when, and then I would push.

My husband held one leg while my best friend held the other and within’ 3 waves my son was born at 11:56 am! As the Dr. stitched me and took care of the placenta she said to me, “It’s amazing how calm you are.” And my nurse said, “we’ve been calling her the labor hero today.” And although I had made the decision to have an epidural I was proud of myself. I was proud that I made it to 7cm on my own after having worked the day I went into my birthing time, having been on Pitocin. I was proud and grateful for the knowledge Hypnobabies had given me. After I had given birth my nurse told me, “You were doing amazing! I know if you wanted to, you could have gone without the epidural.” And I knew I could have, but that wasn’t the choice I made and I have no regrets. 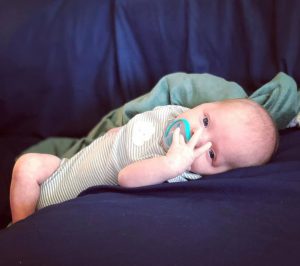 My son was 4lbs 12oz and was having some difficulty with keeping his O2 levels up and he was taken to the NICU. Although the birthing process was over, I would spend another 20 days hanging out at the hospital while my son worked on getting strong enough to come home. This was not the ideal situation and I hope that other moms don’t have to have children in the NICU, however, I wouldn’t change anything because I have my boy now. I’m proud of my birth and my strong baby boy who wanted to meet his mommy and daddy early. If you made it this far, then thank you. I know this isn’t a normal beautiful idea Hypnobabies birth but I am still a hypno-mom and I wanted to share my story.