“At 9:55 am I was complete and having strong urges to push. My doctor (who sat in the nurses station for my entire time in the hospital just waiting for me to be ready) came in and told me to do whatever I needed to do to get baby out and she would adjust as needed!” 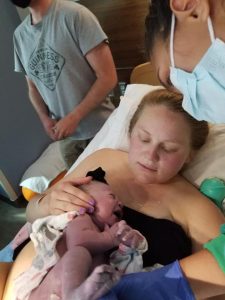 I started having practice waves (Hypnobabies term for contractions) that felt more intense on Tuesday morning. By 6 am they had gone away. This pattern continued through Thursday morning. After the practice waves went away the nausea came on strong. I attempted to eat and get some rest, but I was not successful. I was 39 weeks and 4 days; I knew something was starting to happen but wasn’t sure if I had a mental block. So, I laid down and listened Fear Clearing (Hypnobabies track for releasing fear) and my affirmations.

I decided that afternoon after some more practice waves and nausea I was going to listen to Come Out Baby (Hypnobabies track for encouraging baby to be born). I had not slept well for many nights and so on recommendation for my L&D nurse friend I took some Benadryl and sat in a warm bath. I painted my nails and watched Parks and Rec while in the nice warm bath. As I was sitting there, I started to get waves. I eventually got out and decided to lay in bed and turn on Easy First Stage (Hypnobabies main birthing time track). I attempted to listen but could not get comfortable in my off switch. I decided to sit backwards on my toilet and listen in center throughout waves. It was the most comfortable position at that time.

I told my husband what was going on and told him he should go to bed while I tried to get rest or work through these waves. That didn’t last long… things started to get more intense, so I woke him up and texted my doula. My waters released around midnight and my waves started to get more consistent about 4 mins apart. My doula came over and I could feel most of the wave in my back. We put the tens unit on and talked about trying to get baby in a better position. At around 3:30 am the waves were consistently 3-4 minutes apart and I started having the shakes and getting nauseous. My doula recommended that since my water had broken, and I seemed to be in a good pattern we should head to the hospital. Unfortunately, due to Covid my doula was not able to come with us.

When we got to L&D I was 6 cm. I was more dehydrated then I realized and so they gave me some fluids. This caused my waves to space out and I didn’t help them by getting into the bathtub. I did however get a nice nap in the bathtub 😂. When I got out, I had not progressed which I was not too worried about. We walked around the hallways for an hour while I continued to throw up and use my Peace cue (Hypnobabies cue for instant physical comfort) through waves. At the end of the hour my waves had spaced to 6 minutes apart. No one was rushing me, but they said if we could get some consistent waves, we would have a baby soon. So, at 7 am I started on the smallest dose of Pitocin, with the plan to not increase unless talking to me.

From there things got intense and staying in hypnosis was very difficult for me. Thankfully I had an incredibly supportive husband and the most amazing nurse who stood by my side. At 9:55 am I was complete and having strong urges to push. My doctor (who sat in the nurses station for my entire time in the hospital just waiting for me to be ready) came in and told me to do whatever I needed to do to get baby out and she would adjust as needed! Unfortunately, baby was in fact posterior. My doctor offered to help rotate him while I pushed, which at that point I was so tired and hungry I said yes. He was born shortly after at 10:22 am on 5/15/2020.

I did have some bleeding that involved more medication and lots of fundal checks. As soon as baby was out, I was able to find hypnosis while birthing the placenta and going through fundal checks. Although it was not completely peaceful or “p**n” free it was the exact birth I had imagined. Not to mention recovery without an epidural has been great! I’m so thankful for this program and the stress relief it allowed me throughout pregnancy.