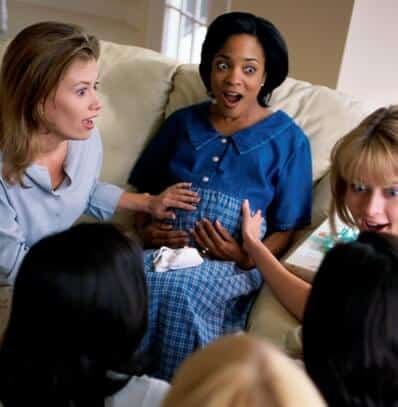 At Hypnobabies, we teach a lot about the impact that our use of specific language has on pregnant, birthing and post-partum mothers. Word association, connotations and “waking suggestions” create physical effects, actually changing our chemical makeup and of course, our all-important belief systems about childbirth.

We found a terrific article that affirms our admonition that positive and encouraging language and messages need to be used when we are around pregnant women. Telling “war stories” about childbirth frightens and confuses expectant moms and can be harmful!

‘I died, but it was fine,” a woman at a barbecue told me when I was nine months’ pregnant. She was a stranger, her story unsolicited. As I nodded and nervously sipped a glass of water, she explained how she’d suffered from pre-eclampsia, “died” on the obstetrician’s table and been brought back to life.

Hers was only one of numerous unsolicited stories that would have been enough to act as excellent birth control, had that ship not already sailed.

“I had two C-sections. I still can’t sit up,” a waitress announced on seeing my burgeoning belly. “You’ll never be able to have decent sex again,” lamented one. “Just say yes to the epidural,” warned another.

Funny how our own personal experiences become The Big Truth…

There is a dominant philosophy in the Western world that says birth is something women survive, not something they actively take part in or, heaven forbid, enjoy. As fewer women experience natural birth, with caesarean section rates more than doubling in the past 15 years (now 31 percent, more than 40 percent in private hospitals), fewer Australian mothers will have a different tale to tell.

But perhaps the oft-repeated war stories about birth aren’t as harmless as some believe. In otherwise healthy and normal births, fear can lead to low levels of oxytocin, a hormone involved in lovemaking, breastfeeding and in the normal stages of labour. Fear is also known to lead to lower levels of pain-relieving endorphins and higher levels of adrenaline, which can lead to panic, increased pain and foetal distress.