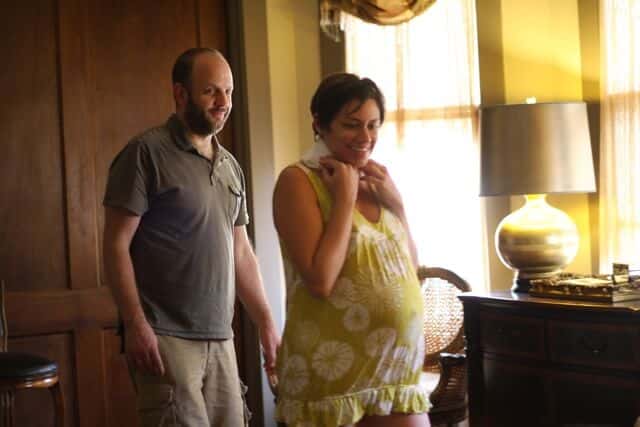 My “guess date” (not due date – it’s always more of a guess anyway 😉 ) was Tuesday, July 20th. Come Monday, July 26th, we’d had a few pre-birthing time starts where I’d have pressure waves for about 3-4 hours but they never did they continue past that. We went in for a sonogram to make sure Jack and my placenta looked okay. Jack scored an 8 out of 8 but my placenta was getting “ripe” which was to be expected at 41 weeks.

The midwives said if I wasn’t in active birthing time by Wednesday, we’d have to get things going with medical intervention (rather than natural). So, after a power walk at the mall and an awesome chiropractor adjustment, my husband and I came home, prayed, and continued doing all the natural birthing starts we knew to do (nipple stem, walking, etc).

Finally on Tuesday afternoon around 4, I was having regular pressure waves 5 minutes apart but they weren’t a minute long nor were they growing in intensity. The pressure waves continued throughout the night but would come and go every couple hours. I was able to sleep about 4 hours that night but by Wednesday morning we knew we would have to go in to the birthing center and might eventually have to do medicinal intervention. We packed the car (just in case and glad we did 😉 ) and headed to the birth center around 9:30 am. Once we arrived, we hit our first hurdle – the head midwife wanted Jack and me to be monitored to make sure Jack was responding well to the contractions.

At this point, we realized just how much our birth center involved the local hospital and their doctors which was annoying. I know it’s important when there’s a medical emergency but we did not realize just how often they consulted with the doctors and allowed the doctors to give input. We chose a birth center for a reason and felt like how involved the hospital was was not clearly communicated in our initial tour. Anyway, I digress.  (editors note:  maybe a good question for moms to ask their midwives!)

After a couple hours of pressure waves, they were still not seeing the response from Jack that they wanted to see. He was healthy…he was just being too chill during the contractions so they had me drink some juice we bought but they still weren’t seeing his numbers move like they wanted. We went upstairs for a consult with the midwife and if we didn’t start seeing more active numbers from Jack, we’d have to be transferred to the hospital. She then said she wanted to check me but when she did, she also started to sweep my membranes more which is not what we said we could do. I asked her to stop then pretty much broke down crying. Not only did we not really have the money to transfer to the hospital, we felt the natural birth we so badly wanted for Jack and I was continuing to slip more and more out of our fingers. The midwife told us to go back downstairs and continue getting monitored for a while longer. I drank some sugar-infused grape juice but still nothing (The juice we brought was too naturally sweetened I guess).  Enter the only “drugs” I used that day – a Coke. That’s right, a Coca Cola. Our birth assistant walked in with a Coke in one hand and a Dr. Pepper in the other and said, “Which one do you want?”. I replied, “Oh no, I don’t drink sodas. Like ever.”  “Well, it’s this or a transfer.” I resigned, “I’ll take the Coke.” After many shudders and bleh faces, I downed the Coke and that’s what gave Jack the zippadeedoodah we needed to get some good numbers on the monitors. Phew. Hurdle #1 was crossed. (And a good friend commented today at what a blessing it was that since I never do drink soda, my body responded dramatically which is how we needed it to. Had I been a soda drinker that might not have been the case…so true.)

It was around 12 or so by this time and my awesomely amazing doula, Katherine, arrived to assist Jon and I through the pressure waves. I walked around the room doing laps and hanging on Jon through the pressure waves. One of my favorite ways to relax through the waves was to sit on the birthing ball and lean back on Jon so I could fully relax my body from my shoulders down. As each wave would come on, I would say different things like, “Relaaaaaaxxxxx” or “Releeeeeease” which helped a lot. Although I was now in my active birthing time, the pressure waves were not enough to get me to dilate more than 5.

We needed to see me progress more and get my pressure waves to get more intense. Beverly, our birth assistant, knowing we wanted to go as natural as possible, suggested a Foley catheter induction which is a small balloon that is inflated with saline water so as to put pressure on the cervix so it will continue to open. This helped but only for a while. I continued to have pressure waves “leisurely” for a couple more hours. By leisurely, I mean I rested on the bed or on the birthing ball in between waves. However, although it was more restful for me to be that way, I was not really allowing for stronger pressure waves to build.

By 8 pm, I was still at 5 cm and Beverly sat Jon and I down. “It’s time to dig in now and get this labor going.” I remember thinking, “Haven’t I been laboring already?!” Her main concern was that I would just continue progressing slowly which is fine but then I’d be too tired once we really got to the end and wouldn’t be able to push. Her suggestion: more nipple stim and power walking. I laid back down on the bed while we did nipple stim but the pressure waves were getting too intense for me to just lay there. I found that it took me a few pressure waves to figure out how to fully relax through each so I didn’t like changing activities or positions but at this point laying down was too much. So, outside we went. Fortunately, it was 8 pm so it was a little cooler (and the 100+ degree days had not yet come upon us here in Texas).  As people were playing with their dogs in the dog park across the way, I would waddle along holding hands with Jon with my sweet doula walking behind coaching us along. When a wave would come on, I’d either walk through it saying “Ahhhhhhh” or “Reeelllaaaaxxxxx” or I blew raspberries with my mouth. (<–weird thing but helped a lot); other times I’d stop and sway back and forth while leaning on Jon. I’m sure I was a sight but I didn’t care. It was like a switch turned on in my body.

After about 45 minutes, we went back inside and as much as I wanted to get into the tub, they wouldn’t let me. I think they were worried I’d get too relaxed so my husband and I got in the shower instead. My Hypnobabies had been helping me all day but here’s the key – it worked best when I would really relax my mind and allow it to.

I now know I was in transformation during that hour and 15 minutes and by 9:15 I said, “I’m ready to push!” Afterwards, my birth assistant and doula had said they were worried it was more my brain saying I wanted to push even if my body wasn’t saying it. And, in a way, they were right. I was wishfully saying I wanted to push and, thank the Lord, I was far along enough that I could start pushing. I had gone from 5 to 8 cm in just a little over an hour!
It took me a good 15-20 minutes to learn how to push and work with the pressure waves instead of against them. Around 9:40 or so, Jack’s heart rate was getting a little low so they put me on a saline IV in like 5 seconds.

After 20 more minutes, at 10:02 pm, Jack was here! Jon, still in his bathing suit trunks from holding me in the shower, helped pull Jack out and up onto my chest. He was 7 lb 4 oz, 20.5 inches long and so alert. I’ve always thought I would just start bawling but I didn’t. I just said “Oh my God, oh my God, oh my God” about a million times and just held him. He latched on pretty quickly and I got to hold him for about 45 minutes.

I was definitely in shock…a good kind of shock. Even after a couple hours I would just look at him and think, “Is he really ours? Am I really allowed to take him?”. I had known him in my belly for so long and to see him out was, I don’t know, just so different. I felt like a bad mother at first because although I knew I loved him, I didn’t feel like I knew him. I told Jon that on the way home and he said he felt the same way which made me feel better. Now, we get to learn who he really is which is great. 🙂 We left the birth center around 4:30 am and were back in our own bed by 5. It was just so surreal but awesome! My family was in such shock at the photos of him and how alert he was at that time and still even now. We were so glad to have been able to birth him naturally.

We learned later that the pushing probably would’ve gone even faster if Jack’s hands hadn’t been up.  Overall, my birthing time was 12 hours with about 40 minutes of pushing. It was quite the experience but a beautiful one. I am so thankful for my awesome birth team, my amazing husband, and Hypnobabies.

My main advice would be to listen to your track in a lot of different positions. I mainly listened at night on my left side and found that during my birthing time, laying on my left side was the most uncomfortable. So I think going into center then walking while listening to a track would’ve been good as well as on a birthing ball more, etc. I also wish I had practiced my “going into center” at diff times of day more often. I was good at listening to my tracks every day but not at practicing my switch at other times. Oh and I highly, highly recommend getting chiropractor adjustments towards the end. He was born on Wed and I went Mon, Tues, and Wed and she realigned my hips to where they needed to be for him to pass through. Who knows if I hadn’t been adjusted. Anyway, that’s my two cents. 🙂