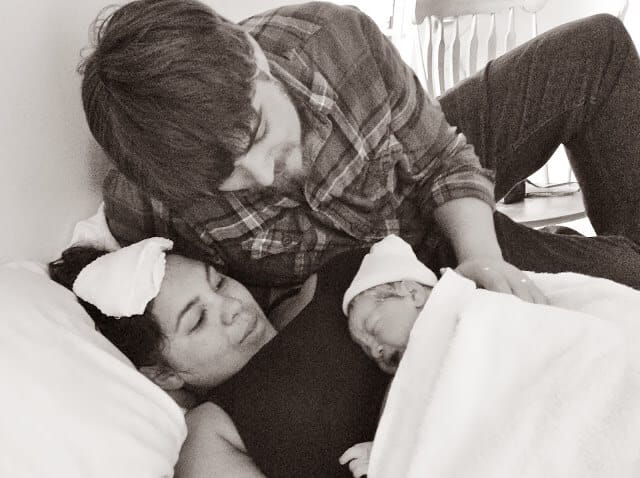 “I was surprised at how the reality of the birth experience differed from what I imagined, even with all of my preparation. I couldn’t have dreamed of a better birth.”

Thank you to Hypno-Mom Alexis for sharing her birth story!

I woke up at 1:30 am on Tuesday, October 29 and didn’t think it was possible. I was two days past my due date, but as of Monday evening, it felt like Baby Ben would never arrive. My mom arrived from Tucson on Saturday. After two days together, exploring the area and indulging in delicious barbecue, she was ready to meet her grandson.

I scheduled a reflexology appointment for Monday afternoon. The midwife said that it would encourage contractions, and I’ve never been one to turn down a massage. The masseuse showed me some key pressure points and sent me on my way. Later that afternoon, we went for a good walk around our hilly neighborhood, in another effort to get things started. When we went to bed that evening, though, I didn’t see an end to my pregnancy in the foreseeable future.

Yet at 1:30 am, something felt different. I climbed into the bath for the first of many times that night and tried to relax. This must be early labor, maybe even pre-labor.

At 3:00 am, I wandered into the kitchen and poured myself the first of many glasses of water. I decided to wake up Josh and tell him that I was having contractions, but it felt really early, so there was no reason to worry. Ever the faithful partner, he got up anyway and started timing. They were five minutes apart.

At 6:00 am, I’d sufficiently run up our water bill and Josh decided to phone the on-call midwife. She said it sounded like I was in early labor. She told me to try to sleep as I was already behind the curve from waking up in the middle of the night. I kept trying to meditate deeply, but the contractions were distracting. In that moment, I panicked – If this is early labor, what is transition going to be like? What about the second stage?

The contractions continued, gradually getting closer and closer together. Josh and I went through them all, using the cues that we’d learned in our Hynobabies class. Peace. Relax. I tried to doze off in between but was just uncomfortable enough not to sleep.

Finally, at 1:15 pm, Josh declared that they seemed to be more intense and he was going to call the birth center again. I told him not to, that it didn’t seem like it was time. For once, he ignored me and called anyway. This time, the midwife on call told us to go ahead and come in, though I could tell by her tone that I wasn’t alone in thinking that we’d end up back at home that afternoon, sans baby. I climbed into the car with my mother and my husband, snugly positioned next to an empty car seat

We arrived at the birth center at 2:00 pm. To everyone’s surprise, I was already 8 centimeters dilated. Well, this isn’t so bad.

I climbed into the birthing tub until around 3:45 pm when the midwife suggested we forego a water birth. Ben’s heart rate lowered slightly during my contractions. It would be easier to monitor him out of the tub. I didn’t realize it then, but she was a bit concerned. She called in another midwife to assist.

Up until about a month ago, I thought I would have a water birth. Then one day, I declared that I had a feeling I wouldn’t actually have Ben in the water. I didn’t feel disappointed about it – it just struck me as a reality. When she asked me to move to the bed, I wasn’t surprised. We dried off and changed locations. They gave me some oxygen and Ben’s heartbeat quickly picked back up.

The next 30 minutes went by quickly. At 4:20 pm, Benjamin Alexander came into our world, healthy, perfect, and safe.

I’m so grateful that my mom was able to be there, a calm, reassuring presence in the room. She stayed with us for a week after Ben arrived which was invaluable. I will treasure that time for the rest of my life.

Josh was incredible throughout the entire process. Whenever my attempts to relax faltered, he brought be back to it. That day and the days since have reaffirmed his position in my life as my sense of calm, support, and my partner.

I was surprised at how the reality of the birth experience differed from what I imagined, even with all of my preparation. I couldn’t have dreamed of a better birth.