Beautiful Hypnobabies Birthing with a Change of Plans

“I was devastated and so nervous to start Pitocin, so my husband and doula decided to read me the Change of Plans script and it really helped me stay in such a positive mind set! I listened to my tracks constantly, and all the pressure waves leading up to transformation really did feel like hugs!” 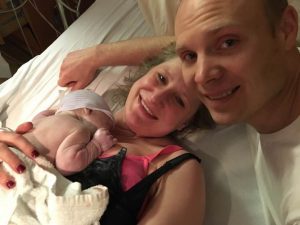 Thank you Hypnobabies for helping us bring our son into the world yesterday 4/5/17! It was not what we had planned, but the program helped me deal with a different birthing journey than expected and we used the Change of Plans script and it helped so much! Below is my story. It is definitely not what my ideal birth was going to look like but is such a good example of flowing with the birthing journey you are given and using all the Hypnobabies tools to still have a beautiful pain medication free hospital birth!

My water broke at 5 am Tuesday morning and pressure waves did not start on their own. I am GBS+ and giving birth in a hospital, so we knew that I would most likely get pressured into Pitocin if things didn’t start within the first 12 hours. I understood and didn’t want anything bad to happen to my baby but I still did everything I could to get my pressure waves to start on their own.

By 5 pm nothing was happening on its own so we chose to start Pitocin by 5:30 pm. I was devastated and so nervous to start Pitocin, so my husband and doula decided to read me the Change of Plans script and it really helped me stay in such a positive mind set! I listened to my tracks constantly, and all the pressure waves leading up to transformation really did feel like hugs! (It sounds corny, but it’s so true!) Such a different experience from my first birth (which was also an un-medicated hospital birth but I did not use Hypnobabies the way I had planned to so I don’t consider my first birth to be a Hypnobabies birth).

I was so in awe at how calm and happy I was, even with all the iv’s running and monitors on my belly (when on Pitocin, constant monitoring is required which was also heart breaking for me. Luckily they had wireless and water proof monitors so I could do anything I wanted which was so nice!). 9 hours after Pitocin started (2:30 am) I was at 4 cm while Pitocin was running at 12 ml/hr (we started at 2 ml/hr). My midwife suggested I just try to get some rest. I didn’t think I’d be able to with pressure waves etc. but I listened to my Deeping track and Hypnotic Childbirth for 2.5 hours and actually slept right through the pressure waves!

At 4 am I realized the waves were so much tighter and deeper and I knew things were moving/changing. In those 2 hours of rest/listening to hypnosis tracks (2-4am) I went from 4 cm to almost 10 and then things moved quickly! My baby was born at 6:13 am and though the end was difficult, my husband and doula kept getting me refocused with my hypnosis cues and hypno-anesthesia imagery.

I was able to push my baby out using my own instincts and with Mother-Directed pushing! I almost lost control of my emotions a few times but thanks to Hypnobabies and the hypnotic anchors I had created in my mind I kept coming back and refocusing. It was so incredible! I have had a mindset for a long time that if I had Pitocin I wouldn’t be able to have a natural birth and it was incredible to experience working through that fear with my Fear Clearing track as well as the Change of Plans script and to just decide that I could do it! My mind told my body I could, and I did!

I pushed probably only 5-6 times (all mother directed) in the position I had imagined and he was here, only 2 hours after the Pitocin really got me going and my waves really felt intense! I hope this helps you know that even if things don’t quite go the way you planned, Hypnobabies can still help give you a beautiful birthing experience!