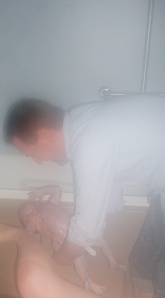 My husband got around to the back just in time to take over from the midwife and catch our son.  Instantly, I was turning around and my husband was handing our son to me.  It was a magical moment.
Owain let a short cry out just as he was being born and then he peacefully snuggled against my chest.  His cord was not clamped until it stopped pulsing.  I birthed the placenta around the same time and it was intact and healthy.  On inspection, we realised that Owain had lots of vernix on him and it was quite thick in some places.  So all that worry about him being overdue was unnecessary.  My ultrasound dates were probably about a week out.  He came when he indeed was ready.
Reflections:
At first, I felt that I had not implemented my Hypnobabies tools very well because I found the experience quite overwhelming and intense.  I was quite distracted during my pregnancy with study and did not really get into the hypnosis practice until the last couple of weeks.
However, I have realised that whilst I may not have been in a deep and calm/quiet hypnotic state I was still using my tools to help me in the way I needed for this birth. I was very focused throughout and used visualisation, my lightswitch (in the first half of the birth), breathing, affirmations (particularly ‘open’) and the cue words ‘release’ and ‘relax’.  All of those tools, I practiced with Hypnobabies.  So I guess it did help immensely.  I particularly think that Hypnobabies helped me to listen to my body, focus deeply, and face the challenges of my birth instinctually (i.e. the intensity of a fast birth and the lip of cervix).  I had intentionally visualised a fast birth (2-4 hours) without realising that this could mean an intensity that I had not before experienced.  Next time, I still would like a fast birth, but with more mental preparation to feel calm and positive during the birth.
Thank you Hypnobabies, I had a wonderfully empowering birth experience!
If you’ve made it to the end, I hope something I have shared will help and empower you on your hypno-journey!
Love Christa 🙂