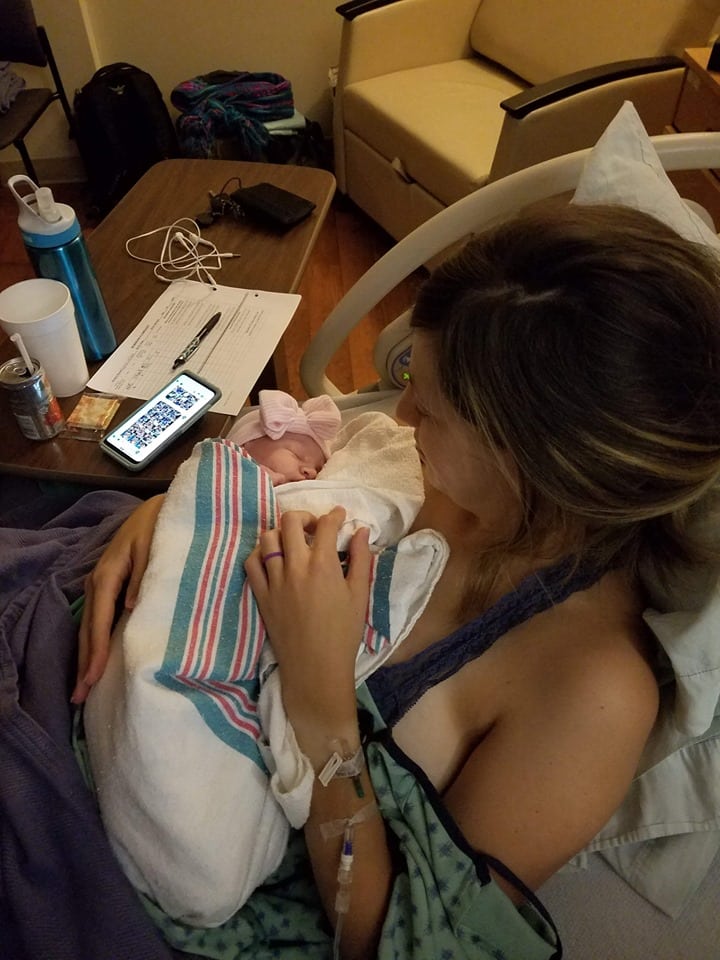 “My husband told me later that he didn’t believe me, but he reached down to check and he felt the baby’s entire head already out of my body!”

I just had my hypno-baby on August 15th! Gemma’s birth did not go exactly how I envisioned it, but it was an amazing experience that was better than I could have imagined. This was my third baby, but first hypno-baby. My first two births did not go badly, but I had always wanted to birth my babies more naturally (I had epidurals for both) and Hypnobabies seemed like a tool that could help me accomplish that this time. This was also the first time that I hired a doula and I believe that she was also key in helping me accomplish the natural birth I wanted as well. 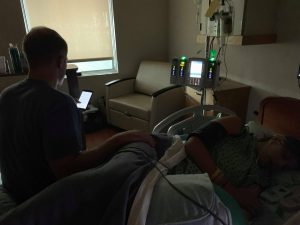 I had prodromal waves (Hypnobabies word for contractions) for weeks leading up to the birth, sometimes very strong ones. At one point when I believed that it was the night (I had several nights that I thought this), I laid down to listen to “Deepening Your Hypnosis” (Hypnobabies track for deepening the level of hypnosis) and it was the first time I felt my orange hypno-anesthesia working. It reminded me of the heavy and numb feeling that I remember with my epidurals and I felt no discomfort despite being able to tell that the waves were very strong. Even though I didn’t have the baby that day, it did give me more confidence that the hypnosis was working.

We found out that I was already 5-6cm at 40w1d. We live 25 minutes from the hospital and my last baby was quick. I had been stuck in this prodromal wave cycle, so with some prayer, we decided to have them induce me by breaking my water at 41 weeks. My water also broke spontaneously last time and lead to my birthing time (Hypnobabies word for labor), so the hope was that this would accomplish the same thing. I never had to induce before, but I was at peace about the decision. 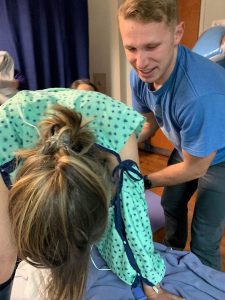 We showed up early and my water was broken by 6 am. Some waves did start, but they were fairly mild and a midday check showed that they had not progressed me. By 4 pm, we decided to start a Pitocin drip at the advice of the midwife. Even though I felt it was the right decision, I was very scared and discouraged in the moment that baby was not coming yet.

The extra wiring, I needed to be on the monitors now, and the drip was particularly discouraging. But both the nurse and my doula could tell that I was upset and offered words of encouragement. My husband was amazing that day (more on that later) but this was one of the moments that I could see how more female presence at births can be so powerful. They gave me the emotional support I needed then, while my husband held my hand. With that, I was able to take some deep breaths and continue listening to my tracks and re-center. 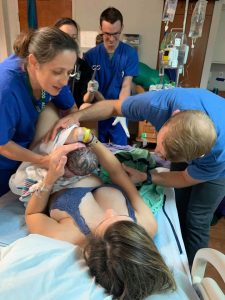 They started the Pitocin very low. I asked my doula and my husband to remind me when the waves got stronger that it was what we had been praying for. After they raised the Pitocin a second time, my waves became regular and finally became stronger very quickly. I was listening to “Easy First Stage” (Hypnobabies main birthing day track) in one ear and my doula was also doing her own version of a prompt with each wave, encouraging me and saying “thank you, Lord, for the progress of this wave.” I started to feel more focused and determined as they continued to get stronger.

I had been sitting on the birthing ball and decided I wanted to move to a sort of all-fours on my yoga mat, my upper body supported by the birthing ball. I think this is when transformation (Hypnobabies word for transition) started. I started vocalizing and it was very intense for me. I can’t at all claim that it wasn’t uncomfortable, but I was still able to embrace the waves and appreciate that they were getting me closer to the baby. My doula did some hip compressions and my husband was rubbing my back. I remember hearing the reminder in the track “I feel the love of those supporting me” and how true that was in that moment especially. 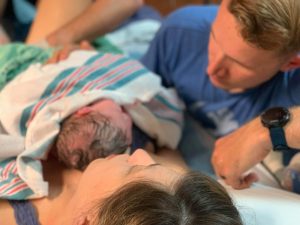 At a certain point, I felt an immense amount of pressure going down through my belly, sensed I wasn’t in the right position on all-fours anymore and that I needed to get up. I said that I wanted to get on the bed and lay down. There was a kind of silly part of me that thought “maybe I can just lay down and take a break.”

Upon standing up, the feeling that I needed to push came on almost instantly. I grabbed the side of the bed while standing there. I voiced “I need … I need to push!” I remember my husband saying” ok don’t push yet, let’s get on the bed..” We had previously discussed me trying to push on all-fours on the bed, so he was trying to get me there. But the need to push was so intense that I think my first push was while he was saying this. I felt the baby drop far down into my birth canal with that first push. I said, “the baby is coming!” 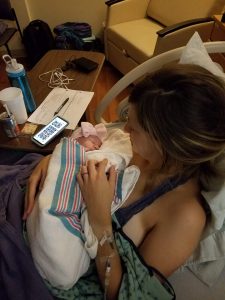 I was vocalizing in a way that almost scared myself, but I had no control over it. My husband told me later that he didn’t believe me, but he reached down to check and he felt the baby’s entire head already out of my body! My husband yelled that the baby was coming and as he started catching the baby, the room filled up with the birthing team. The midwife ran up to help him get the baby with her bare hands, it happened so fast. The baby was out in two big pushes. It was over in a matter of seconds.

I was shaking and probably had more adrenaline rushing through me than I’ve ever felt before. I remember my doula was tearing up saying “Amy, you did it!” and I cried out of relief that it was over and when I heard the baby cry behind me. My husband came up and said gently in my ear “Amy, it’s a girl!” And my heart felt so full. My husband was incredibly happy when our other children were born, but this was the most excited that I have ever seen him. I had it in my birth plan that I wanted him to be the one to tell me the gender, and he ended up being the one who got to catch our daughter coming into the world as well.

They helped me onto the bed (this was actually really hard and awkward because of all the monitor cords and the additional cord attached to the baby now!) where I got to hold our daughter while I birthed the placenta. Gemma Hope weighed 8 pounds, 12 oz and measured almost 19 inches. I did not tear at all. We had started the Pitocin at 4 pm and she was born at 6:30 pm. 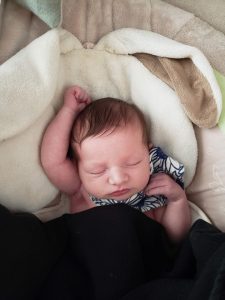 It’s been a few days, and the feeling of it is still so very surreal. I know Hypnobabies helped me stay centered and focused. That and having a doula who was dedicated to learning about Hypnobabies made all the difference as well. * The whole experience has made me so astounded at the minds and bodies that God gave us.

*She is not technically a hypno-doula now but has said that she wants to use Hypnobabies herself for her next baby and is on her way to officially become a hypno-doula as well!