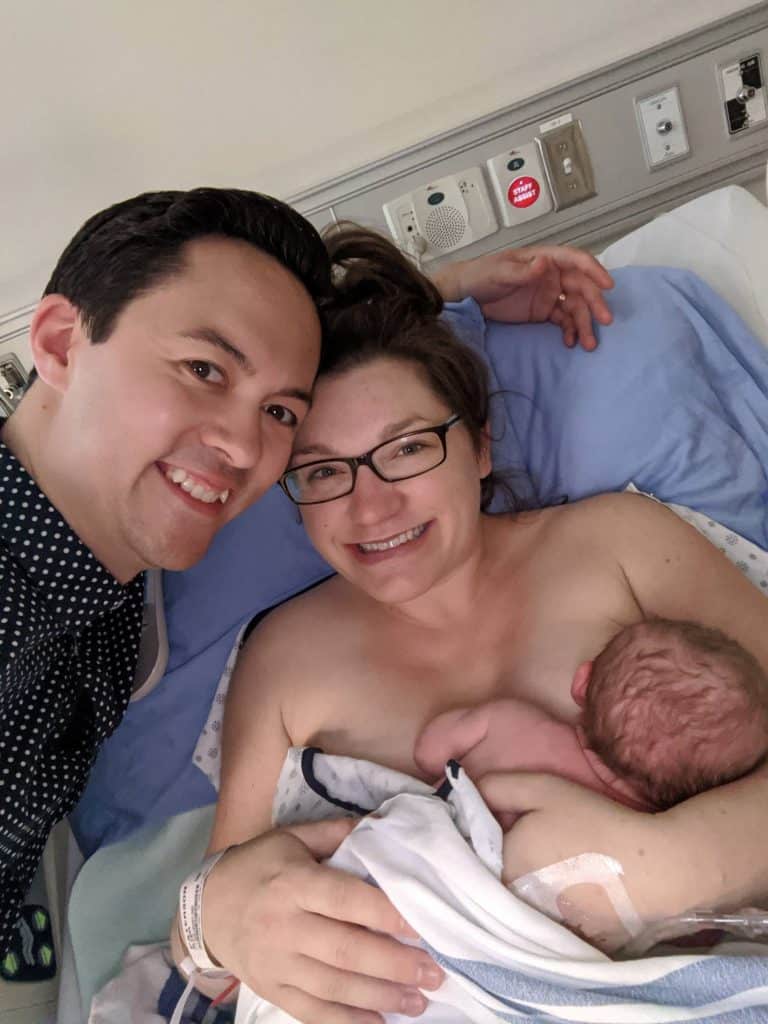 “The cutest thing was that during the first evening she was with us, my husband was holding her and soothing her to sleep, and I overheard him using hypnosis cues on her to help calm her down (“loose and limp…deeper…”). I said, “are you hypnotizing our baby?!” and he said, “she’s been hearing the cues for months!”. So sweet.”

I wanted to share our birth story, since reading the Hypnobabies stories on the website was so helpful for me throughout my pregnancy.

Our intention was to have our baby at a local birthing center, attended by midwives, without any intervention, and preferably in a birthing tub. Even though very little ended up going as we’d hoped, we had a positive experience overall and used our Hypnobabies training at many steps along the way. 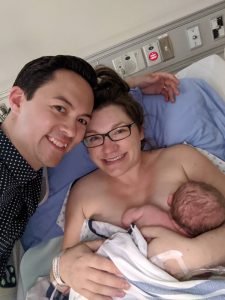 The first time we put Hypnobabies to use was at 28 weeks, when our baby switched from a transverse position (where she’d been since week 20, with her head under my right ribs and feet kicking my cervix) to a breech position (head in the same place, but butt and feet both down). I’d done some Spinning Babies techniques that evening to try and encourage her to turn, and overnight I started having really intense Braxton Hicks waves, which continued on and off until the next evening. Once I realized what was happening, I started switching from center (Hypnobabies tool for eyes open hypnosis) to off during each wave, and it helped so much. This experience really helped me believe that my Hypnobabies training would be helpful during the birth itself.

Baby continued to be in a breech position for the remainder of the pregnancy, despite us trying everything possible to get her to flip. I even went for acupuncture and moxibustion, which made me quite anxious, and listening to my Turn Your Breech Baby track (Hypnobabies hypnosis track to encourage baby to turn head down) and using my Release cue (Hypnobabies cue to instantly enter hypnosis) really helped me relax in that setting despite my anxiety.

Eventually we went for an ECV, where the doctor would try to get baby to turn. I listened to Fear Clearing (Hypnobabies track to release any fears) the night before, and while lying in bed in the hospital waiting for the procedure I used my Deepening Your Hypnosis track (Hypnobabies track to deepen the level of hypnosis), which allowed me to get some rest despite being in quite an anxious state. Funnily enough, my doctor was performing another ECV in the bed next to mine just before my procedure started, and because I was listening to my Deepening track I was so far out that I didn’t even notice when it started going downhill and the nurses started bustling around, prepping the mother for an emergency C-section (she didn’t end up needing it, thankfully). Thanks to my hypnosis, I had no clue that any of that had happened, which was definitely a good thing. I also used my Lightswitch (Hypnobabies tool to turn sensations off in the body) and Hypno-anesthesia while the nurse put in the IV (she needed a couple of attempts), and it helped so much.

During the ECV itself, I had Deepening playing, and my husband used our Deeper cue (our version of the Relax cue) and kept providing me with other hypnotic suggestions. Interestingly, the nurse that was assisting for the procedure seemed to take on his hypnotic tone of voice, and spoke to me in the same tone, which I found really helpful. The procedure was very intense, and I actively focused on breathing and releasing as much as I could through it. In the end it was unsuccessful, but I did feel that my Hypnobabies training helped me cope well through the entire experience.

Finally, my midwives referred me to an OB because our baby was still breech, and we decided not to schedule a C-section but instead to wait to start my birthing time naturally and find out what position baby was in then. However, as of my guess date (Hypnobabies term for due date), baby was still footling breech, and that fact, combined with the fact that my cervix had already started to open, meant that a scheduled C-section would be the best course of action. We went in the next day and again I was able to use my hypnosis techniques during the time period while we waited for the procedure. While waiting outside the OR, my husband played the relaxation music aloud on his phone, which helped me relax, and I was able to use my release cue during the spinal. 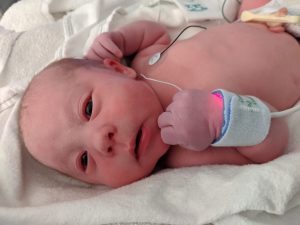 The c-section all went well, although again not quite as planned. I’d strongly requested immediate skin-to-skin without her being washed or wiped down (I kept telling them “I want that wet baby on me!”), but baby needed some assistance with breathing (which apparently is quite common for breech babies born via C-section) and so spent the first hour of her life on a CPAP machine. I only saw her for a few seconds before she was taken away (my husband went with her, as was the plan in case she needed to be removed from me), and I didn’t get to see her again or touch her until about 75 minutes after she was born, for two brief minutes when they placed her on my chest in the hospital hallway. Then it was another half hour until she was brought to my room and I got to finally hold her and feed her. She latched and fed like a little champ (she was hungry!) and now we have this perfect little human named Avery Lianne who we love more than anything. She was 7 lbs, 1 oz, and is so beautiful.

The cutest thing was that during the first evening she was with us, my husband was holding her and soothing her to sleep, and I overheard him using hypnosis cues on her to help calm her down (“loose and limp…deeper…”). I said, “are you hypnotizing our baby?!” and he said, “she’s been hearing the cues for months!”. So sweet.

In the end, despite basically nothing going as planned or hoped, my husband and I are both feeling positive about the birth. The scheduled c-section was 100% the right decision, and the most important thing is that Avery and I are both healthy and safe. And I used my hypnosis a lot, despite not using it at all during the birth itself – funny how that works! I really appreciate having it as a tool to use in all aspects of life going forward.