“In triage at 2:20, I definitely had them fooled about how far along I was. No one guessed I would have been fully dilated based on how calm and quiet I was!”

My Hypno-baby has arrived! It’s a long story but if you’re up for it read on ?

After a pregnancy and birth plan that was planned to be completely natural hit bumps along the way, the ending to this story couldn’t have turned out more perfect. “My baby will be born at the perfect time” couldn’t be more true. 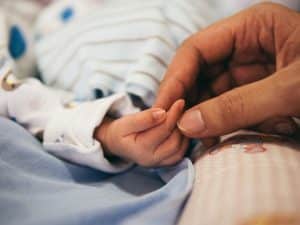 My husband was scheduled to leave for a new job yesterday for 13 days so we had been anxiously awaiting and hoping for this baby to arrive before he left (my guess date was May 3rd and previous siblings arrived very close to theirs). We had decided as couple to have a stretch and sweep (stripping membranes) done at my midwife appointment on May 3rd, if birthing time hadn’t started but as fate would have it, my midwife was already at a birth and the one covering would not do it (which however disappointing, was okay because next most important person to be present was MY midwife. Not a back-up). That afternoon my midwife called and said to come in May 4th for a sweep given the circumstances if we wanted. We did. Timing is a funny thing. Literally in the middle of the appointment, my hubby’s boss called him and offered to push his flight until after baby arrived (he was at home so I was unaware), which he gladly accepted. So the sweep was done and hubby wasn’t going anywhere

I spent the day cleaning our van but also taking it easy as I was having some cramping off and on from the procedure. After putting our older girls to bed that evening, I got a nice cold drink and had a bath before heading to bed. I was hopeful things would start but not convinced (sweeps brought on birthing time with both my older girls). By 4 am I wasn’t comfortable laying down anymore so I elected to start listening to my Hypnobabies hypnosis tracks. I wasn’t convinced birthing time was starting as the waves were still so low like practice waves. By about 6, that thought changed and I made sure hubby understood that and I didn’t stop listening to tracks. I flipped between Birthing Day Affirmations, Easy First Stage, Relaxation Music and a couple of my other favourites. I spent the majority of the time in center, but switched off as much as possible even in between waves.

Active birthing time began somewhere around 12:30 pm. Hubby had dropped our girls off at my parents and he had been timing based on my vocalizations (good thing as I had no idea. I just tried to stay as deep as possible). I kept questioning and second guessing when we should leave. Although I wanted to have a home birth, it wasn’t possible as a precaution because of low platelets. After a couple phone calls to my midwife, I decided it was time to go around 1:30. In triage at 2:20, I definitely had them fooled about how far along I was. No one guessed I would have been fully dilated based on how calm and quiet I was! They no longer let me walk ? (I was okay with that – I didn’t want my water to release in the hall either!) After being run to the room in the wheelchair and getting the only room with a tub by chance (I didn’t even know this hospital had a tub and the biggest disappointment of a hospital birth was the inability to have a water birth), I was in the water before 3 at which point I switched to the pushing track. I listening to my body and let it do all the work as my waters bulged and finally released after a few waves. Three waves, but only two where I helped push and the head was out. After a minute or so break my beautiful boy was born to my own arms with my next wave. 3:06pm, 7lb14oz, 19.5in ❤️

Thank you Kerry for this Hypnobabies program and thank you to all the admins and instructors that have been more than supportive through this group!