Thanks to RaeAnna from the Hypnobabies Yahoo Group for sharing her birth story with us.

I am sitting here with my precious baby girl on my chest and I’m
giving thanks again to a God who answers prayer! I was hoping to go
into spontaneous labor with Eva Mae but as 41 weeks came closer and
closer I began to lose hope and knew that I would be heading to the

hospital on Monday night, Dec 5. I prayed that if I had to go in at a

certain time, the Lord would make a way for the birth to go the same
as my son’s 2 years ago.

At 9:00am on December 5th I drank a mixture of castor oil/juice/almond

butter and champagne to try to stimulate my uterus into contracting

and labor. It started working around 3pm and we enjoyed a relaxing day
at home getting ready to head to the hospital. My mom came over around

5:30 and we went to dinner and shopping before heading up to the

hospital for the induction. I was having contractions but they were
really easy to work through. Just pressure and a tightening sensation.

At 9:00pm we checked into Vanderbilt and met our nurse, Sylvia. She is

a wonderful lady and I’m really glad we were put in her care!!!
Melissa (the midwife) came in to check me and talk about our options.
I had done a lot of progressing over the past few days and was at a

good 6cm and -1 station. Effacement was only 50% but she said that

subsequent pregnancies are typical to not efface as quickly as first

pregnancies. She allowed us to spend a few hours walking around and

using the breast pump to stimulate stronger contractions and I could

tell that they were getting stronger! Whenever I was hooked up to the

to worry at all about having pitocin. My body was doing what it needed
to do!!! Yay! (In fact, I was also allowed to decline a Heplock IV so
I had NOTHING in my arms!!!!! I was so glad to have that freedom to

move around without distraction!!!)

to be checked. I am so glad that she continued to let me labor on my

own without the constant “hovering” and checking that I know some

women have experienced in labor situations. I knew it wasn’t time to

check on dilation later on. She was happy to work with me and my
wishes! Throughout all this time I was in such a great place mentally.

outside the room I played my tracks on my iPod. The most helpful
tracks to listen to were “Easy First Stage,” “Birthing Day
Affirmations,” and “Visualize Your Birth.” I love the relaxing

background music and the soothing voice of Terri, the founder of
Hypnobabies!
At 2:00am Melissa came back in and between a contraction she checked

on progress. I had a very bulging bag of water and progressed to a 7
but I was still 50% effaced. She asked if I wanted her to break my

eliminate a risk of cord prolapse. I think I was a -2 station at the

water so I agreed. It was a weird sensation to feel all the water gush

there was!!! I was really happy to hear that there was so much

amniotic fluid because low fluid is a side effect of gestational
diabetes at 40-41 weeks gestation.

really concentrate through them. Fortunately not many were right on

the discomfort. I also spent time in and out of the shower with the
hot water spraying on my back and that helped a lot! Throughout the

contractions I kept myself in a deep state of hypnosis using the words
“Peace” “Relax” “Release” and “Open” – all those reminders helped me
keep my body loose and limp throughout a contraction so that Eva Mae
could descend quicker and I would dialate faster.

At 3:30ish I had several really hard contractions that were more

intense but not as long. I could also tell that they were a little
different – like they were lower than the others. All of a sudden
during one of the contractions I knew it was time to push!!!! Sylvia

and Nick were the only ones in the room and Sylvia called her team of
helpers to the room while Nick tried to find Melissa.

I jumped up on the bed and yelled “She’s coming!!!” and started

pushing! I couldn’t wait and my body knew exactly what to do! Sylvia

but Eva Mae’s head started coming out before Melissa got there! When

just coming in to check her!!!” She came over and guided Eva Mae’s

out! She came out so quickly that she completely slid past Sylvia’s
hands into Nick’s hands! From the time I got on the bed to push to the

weigh and get her footprints! She latched on to breast feed quickly
and has been a champion feeder ever since!!! When they took her to
weigh I couldn’t believe she was 10 pounds! She seemed so much lighter

her sweet nature and easy disposition!!! I am so in love with my baby

girl and so thankful that the Lord answered my prayer for an easy,

safe and comfortable childbirth!!! Just like Christian’s birth in

2009, I can’t thank the Hypnobaby program enough for the education and

support of natural childbirth! Nick says I’m the “poster child” for
Hypnobabies!!! The Vanderbilt Midwives are so supportive and

to have a hospital birth with a midwife! Melissa was amazing and my
primary care under Linda was such a wonderful experience!!! I pray 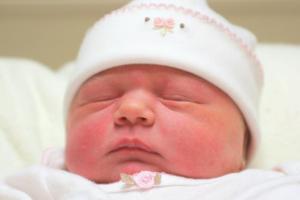